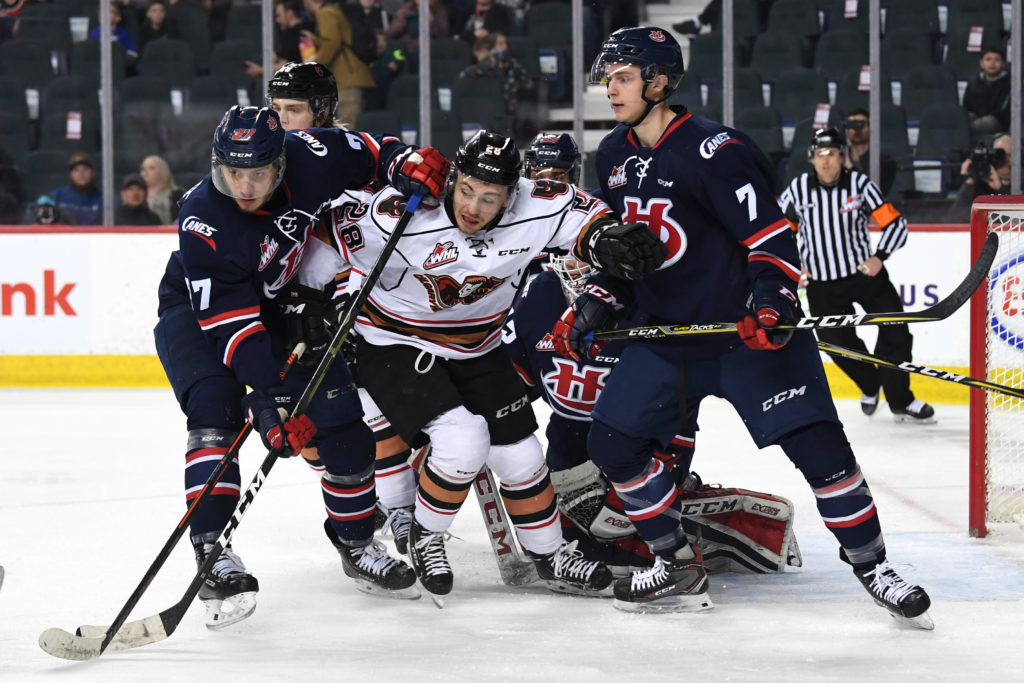 Sunday afternoon at the Scotiabank Saddledome saw the Hitmen fall 7-6 in overtime to the Lethbridge Hurricanes, forcing the deciding Game 7 Tuesday night.

It was a run-and-gun game similar to Game 5 but this time around it ended in heartbreak.

“It was disappointing,” head coach Steve Hamilton said. “I feel like we never caught our stride all game, we were resilient but we couldn’t close it out.

“You have to match the intensity of the situation because every shift is so important and I thought at times we were a step behind. They brought it and it was sloppy hockey in our part.”

Six different Hitmen found the back of the net as Kaden Elder, Cael Zimmerman, Devan Klassen, Ryder Korczak, James Malm and Mark Kastelic all scored for the home side. Jack McNaughton ended with 34 saves in the loss.

It was another wild affair as the Hitmen found themselves down 3-1 to even the game up at three headed into the third period when the offence exploded for both sides. The Hitmen were able to respond each time the ‘Canes jumped out in front with Kastelic giving the Hitmen the lead with 2:24 left to play.

A frantic finish saw Addison tie it up with 33 seconds left to play to force overtime which then led to Ross scoring the game-winner on a wrap-around.

“I think we already forgot about that game and focused in on Tuesday,” Kastelic said. “All year we have battled adversity and I think that has made us ready for this series and we wouldn’t expect it to be any other way.

“We are confident and ready for the challenge. It’s going to be a new experience for a lot of us but we’re excited for it.”

After falling behind 2-0 to then jumping out to a 3-2 series lead, now it all comes down to one last game.

There have been many peaks and valleys in the series for the Hitmen, and now they’ll have to do what they did Saturday night and that’s win on the road.

It doesn’t get any bigger than Game 7.

“You have to be passionate and you’re going to need to want it more,” Elder said. “There has to be desperation and dedication to get the job done and in Game 7 it really comes down to the small details.

“No matter what happens we’ll need to stay positive and this is a game we need.”

But first things first, they’ll need to get back to the way they’ve played in Games 3 and 4 to find success.

“You have to be able to defend and today was not sustainable hockey giving up that many,” Hamilton said. “It’s not a healthy way to play and you’re asking a lot from your offence when that happens and not prioritizing enough on the defence.”

“I like our team, I always have. This group oozes with character and I’ll take this team into a Game 7 anytime.”