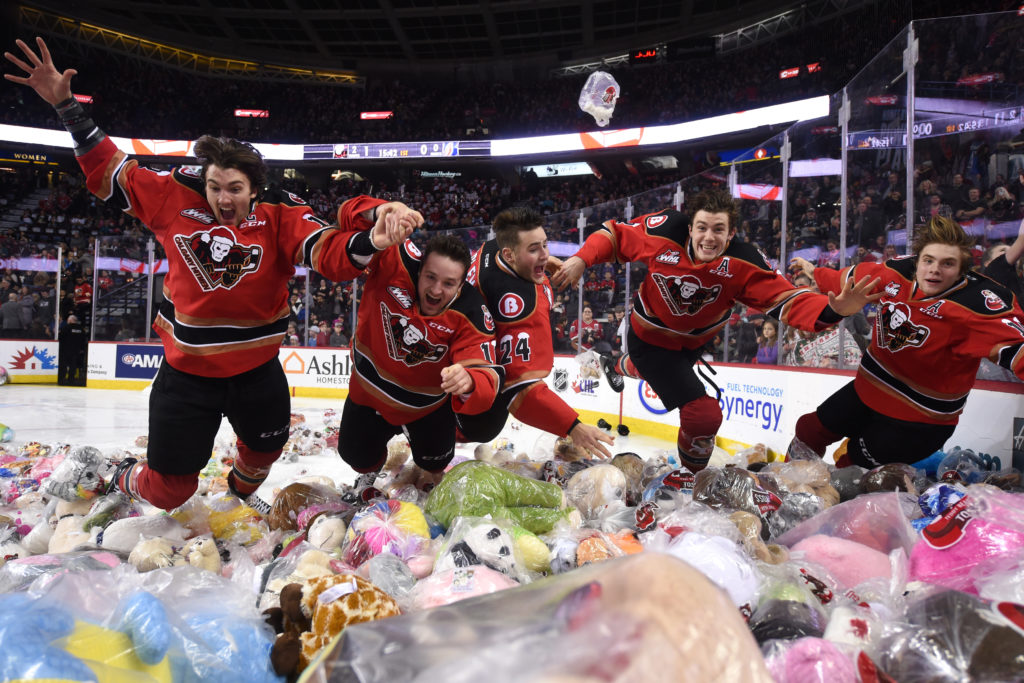 Calgary Hitmen forward Kaden Elder scored on a breakaway 4:18 into the first period of The Brick Teddy Bear Toss 2018, triggering a waterfall of 29,635 stuffed toys on Sunday afternoon at the Scotiabank Saddledome.

That tally sets a new franchise record for most bears collected in a single toss breaking the previous mark of 28,815 established in 2015.

“On behalf of the Hitmen organization we would like to extend our sincere gratitude and appreciation to all fans and The Brick for making today a success,” said Hitmen Vice President and Alternate Governor Mike Moore.  “These bears collected will impact the Calgary community in a significant way.”

Nearly 70 local agencies, including the Salvation Army, Calgary Food Bank, Siksika Nation and Hospice Calgary will share the bears this holiday season.  The Brick is also donating 25 cents for every bear tossed to the Alberta Children’s Hospital Foundation for a total of $7,408.75.

Each bear was counted one by one by over 100 volunteers which included students, teachers, grandparents and hockey fans.

Since the inaugural 1995 toss, the Hitmen, with generous support from their partners and fans, have provided the community with 377,583 teddy bears.

Teddy bears collected will now be taken to The Brick Distribution Centre and then handed over to local charities tomorrow, Monday, Dec. 10 beginning at 8:30 a.m.  Hitmen players will assist the process and then visit the Alberta Children’s Hospital for more teddy bear deliveries later in the morning from 11:00 a.m. to 12:00 p.m.

During the game, Calgary wore special red-themed teddy bear jerseys with snow-capped numbers that will be sold in an online auction opening Monday, Dec. 10, at 10 a.m. and closing Sunday, Dec. 16, at 8 p.m.  Fans can bid on the jerseys along with five team-signed helmets at ElevateAuctions.com with proceeds benefiting the Children’s Miracle Network