Hitmen Fire On All Cylinders 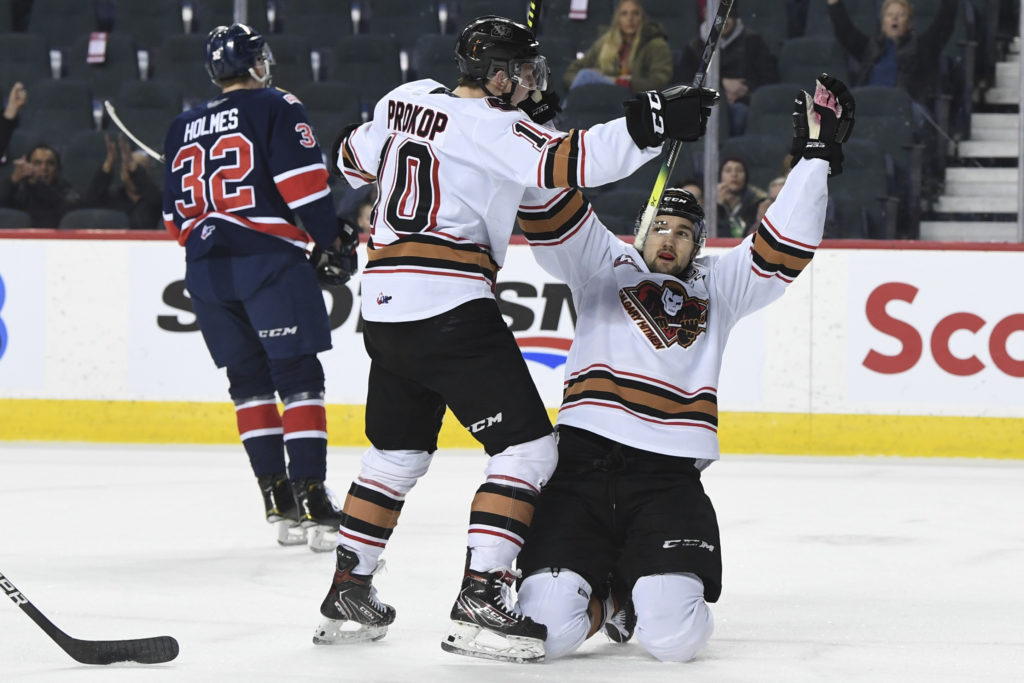 The Hitmen started off fast and they never looked back with an 8-1 victory over the Regina Pats to improve to 29-18-4-1 on the season.

They were as determined as ever to get the two points.

“When you get up early you have a tendency to back off but the guys never did and managed the game well,” head coach Steve Hamilton said. “It was business as usual and the guys were ready to play to erase the results we had over the weekend.

“We want our guys to embrace an identity and embrace a way to play and tonight they did that.”

Mark Kastelic scored a career high four goals and added an assist for a five point night while Carson Focht and Kyle Olson both added a pair of markers. For Olson, the 20-year-old picked up his first points as a Hitmem as he also added two assists for a four-point night. Goaltender Brayden Peters needed just 13 saves to record the win.

And all it took was ten seconds to get the goal party started.

“The way we started was a great tone setter,” Kastelic said. “We were confident in ourselves coming into the contest and were able to play a loose game which is nice to not have a ton of pressure on ourselves.

“We wanted to stay even-keel and I think with each period we never lost our focus.”

For Kastelic, the captain recorded his hat-trick 9:58 into the contest, just coming up short of the franchise record of the fastest hat-trick to start a game of 8:16 set by Jake Virtanen back in 2013.

“I’ve had some amazing games in my career but how things unfolded today was pretty special,” Kastelic said. “To have a game like that in this arena is surreal and to accomplish it with the guys around me made it that much more special.

“It was a fun night all around and a lot of credit goes out to my teammates.”

The captain wasn’t the only one who had a special night, as Olson had also had a memorable night in his hometown.

“It’s been a long time coming,” Olson said. “To be back out there and playing with the Hitmen is awesome after a long road of recovery.

“You take goals whenever you can get them but most importantly was the team getting the win and coming  out ready right away.”

The Hitmen will now look to keep rolling as they head off for a five-game road swing in B.C. which starts Saturday night in Prince George.

An important trip against teams they aren’t too familiar with.

“We’ve played a nice stretch of games and have done good things,” Hamilton said. “We’re getting better and growing as a unit, and that is very encouraging to see as we get closer to the post-season.

“We want to focus on ourselves and play our style of game regardless the location.”