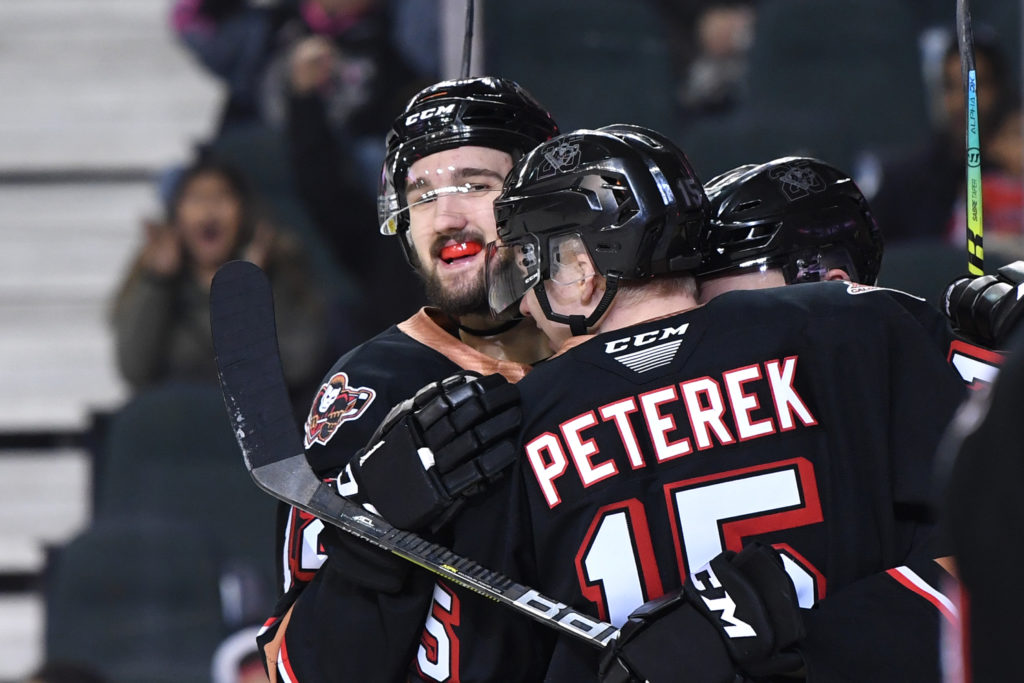 Four is the magic number.

The Hitmen scored four unanswered goals to pick up their fourth straight win Friday night at the Scotiabank Saddledome with a 4-1 victory over the Regina Pats.

It was quite the full-team effort as they continued their hot streak.

“I liked all three periods and we maxed out getting two big points,” head coach Steve Hamilton said. “We were rock solid. You need your best guys to be your best guys and tonight they were.

“We want to play to our identity no matter what building we are playing in and the guys are feeling good how they are playing lately. It was nice to be back home and put on a performance like that, it’s huge.”

Hunter Campbell, Riley Stotts, Jonas Peterek and Carson Focht all found the back of the net for the home side, while Mark Kastelic led the charge with three assists. Egor Zamula had another two point night with two assists to extend his point streak to five games and Jack McNaughton made 24 saves in goal.

Despite giving up the first goal, it was all Hitmen after that as they controlled the game and had the Pats on their heels with their strong forecheck and zone time.

A great way to start the busy weekend.

“We tried to tune out any distractions and focus solely on the task at hand of getting the two points,” Kastelic said. “We’ve had a lot of contributors on the road and it was great to carry that over here at home.

“We got away from our game a little at the start but a lot of credit to the group of recognizing that and getting back to what makes us successful and that’s playing as a team and working hard every shift.”

Just halfway through the second period, Campbell was sprung on a breakaway shorthanded and deked out the Regina goaltender finishing off with a top shelf backhander to even things up. That goal seemed to give the Hitmen a huge spark as just five minutes later, Stotts corralled the puck from the half wall and walked into the slot to fire a wrister into the top right corner for the 2-1 lead.

There was no sitting back in the third as three minutes into the stanza Peterek was right on the doorstep at the perfect spot to tap home a rebound for a comforting two-goal advantage.

With four minutes left to go, it was time for the power play to have some fun and they took advantage with Focht finishing off the pretty passing play for the dagger.

“Anytime you get a short-handed goal it gets everyone going and that was an important goal for us,” Stotts said. “Everyone came out to play and we didn’t want to change how we played just because we were back at home, it was a fun night.

“We learn every game and grow from it which is huge moving forward.”

And now, it’s onward to Edmonton for a big Central Division match up against the Oil Kings Saturday afternoon at 2 pm.

There’s no denying how high the stakes are for this upcoming battle.

“It’s a building we haven’t had a ton of success in and the guys recognize that,” Hamilton said. “We have games in hand we need to take advantage of and with tomorrow being a divisional game it makes it that much more important.

“I expect them to be ready and it’s the most pressing thing facing us right now.”