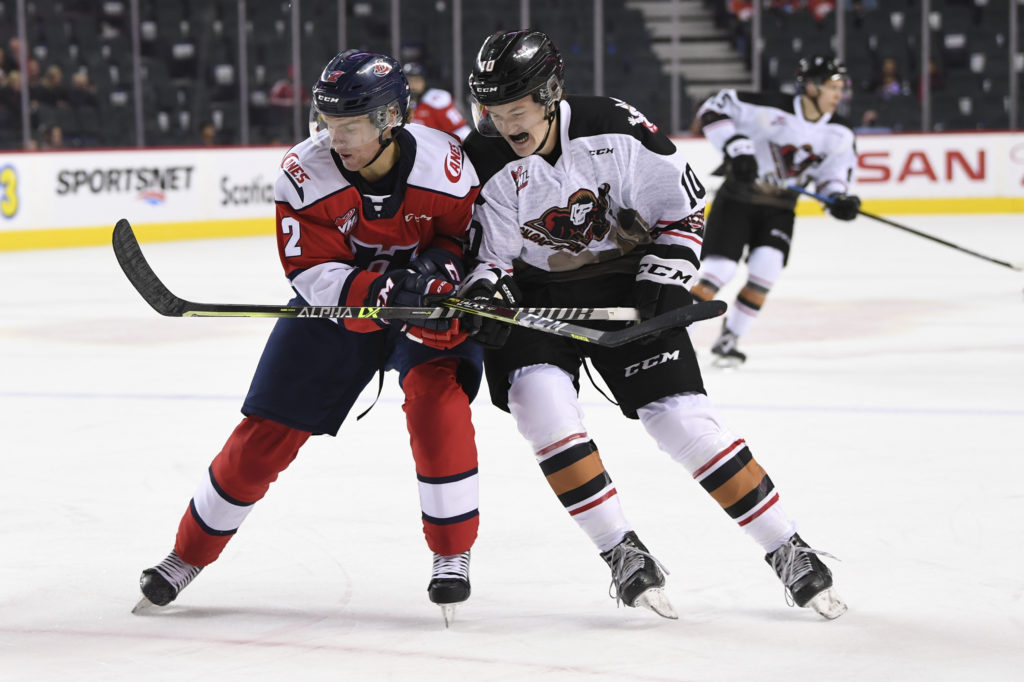 The Calgary Hitmen took to the ice for their regular season home opener on Sunday afternoon with a 4-1 loss to the Lethbridge Hurricanes.

For the first time in 575 days, the Calgary Hitmen saw action at the Scotiabank Saddledome. Debuting their Great Neighbour Jerseys, the Hitmen got off to a good start outshooting the Hurricanes early in the first. The Hitmen got on the scoreboard first with a power play goal by Luke Prokop just 2:56 into the game. This was Prokop’s first goal of the season. Lethbridge followed up with Yegor Klavdiev leading the Hurricanes attack, netting a rebound on the power play to finish out the period.

The Hurricanes quickly pulled ahead in the second with Klavdiev’s second power play goal of the night. In a back and forth period, the score remained tied due to the great efforts from both Brayden Peters and Hurricanes goalie Bryan Thomson, keeping the score even after forty minutes of play.

Logan Barlage netted the Hurricanes third goal with a shot off the right-wing, 2:30 into the third period. Hitmen secured a few chances on the power play, including one in the middle of the third, but was no match for Thomson. Chase Wheatcroft potted an empty net goal after the Hitmen pulled Peters for an extra attacker at the end of the third, making the final score 4-1. The Hitmen finished out the weekend with 2 losses vs. Lethbridge and a season record of 0-2-0-0.

This afternoon’s three stars all went to the Calgary Hitmen Fans who attended Sunday’s game, to thank them for their continued support and patience as the team finally returned to the Saddledome after 19 months.

The Hitmen return to the Saddledome Sunday, October 10th to play the Swift Current Broncos at 2.p.m. MT.