Hitmen Put Up Double Digits In Victory Over Pats 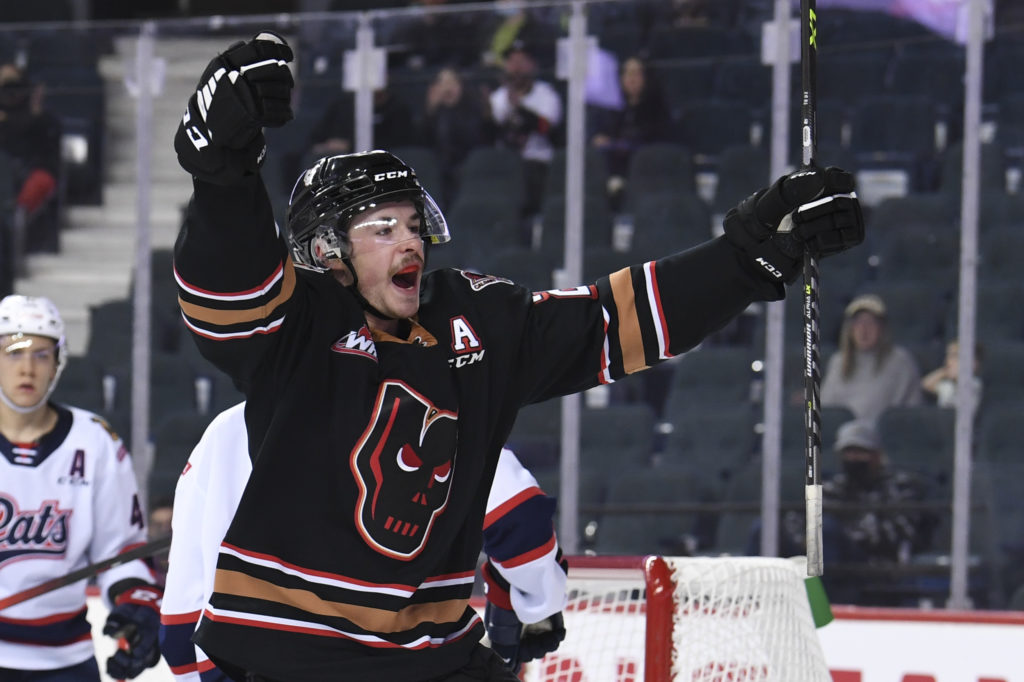 The Calgary Hitmen came out strong scoring double digits in Sunday’s game vs. the Regina Pats. The Hitmen capped off the weekend with 10-3 victory.

It was looking like a scoreless first period until the last minutes when Grayden Siepmann opened up the scoring with his third of the season. Only seconds later, Oliver Tulk put the Hitmen up by two, with a goal on a feed from Maxim Muranov. Riley-Fiddler Schultz joined the Hitmen push with his eighth of the season. The Hitmen finished out the period with a three goal lead.

The flood gates opened for both sides in the second period with six combined goals. Coming off a hot game vs. the Saskatoon Blades the night prior, Sean Tschirgel secured his twelfth of the season with a shorthanded goal with the helper from Fiddler-Schultz. Muranov struck again with his second of the game but it was quickly followed up with the Pats first goal of the game from Easton Armstrong. Connor Bedard put the Pats on the board again at 12:09 into the second making the score 5-2. Fiddler-Schultz had an answer with his second of the game at 14:23. Logan Nijhoff scored the Pats third goal with thirty seconds left in the period.

Cael Zimmerman opened the third period scoring with his third of the year. Fiddler-Schultz kept the momentum going scoring the eighth and ninth Hitmen goals, all on the power play, netting four goals this game. Pats forward Nijhoff was ejected from the game after a hit on Blake Heward and the Hitmen wasted no time capitalizing on the power play with Zimmerman finding the back of the net for the second time.

The Hitmen scored a combined seventeen goals this weekend, with Fiddler-Schultz and Tschigerl scoring a combined 8 goals. The team scored a season high four power play goals and are tied for first in the WHL for short-handed goals with six.

The Hitmen four-game homestand has two games remaining.  The first is on Thursday, Dec. 2 when the Moose Jaw Warriors play a visit to Scotiabank Saddledome in a 7:00 p.m. start.  It’s followed by a Saturday, Dec. 4 date with the Lethbridge Hurricanes in the ENMAX Teddy Bear Toss.  Game time 2:00 p.m. for one of the most eagerly anticipated games of the season.  Fans are asked to bring a stuffed toy to the game and toss it on the ice for charity when the Hitmen score their first goal.