Hitmen Rally Back For Crazy Comeback 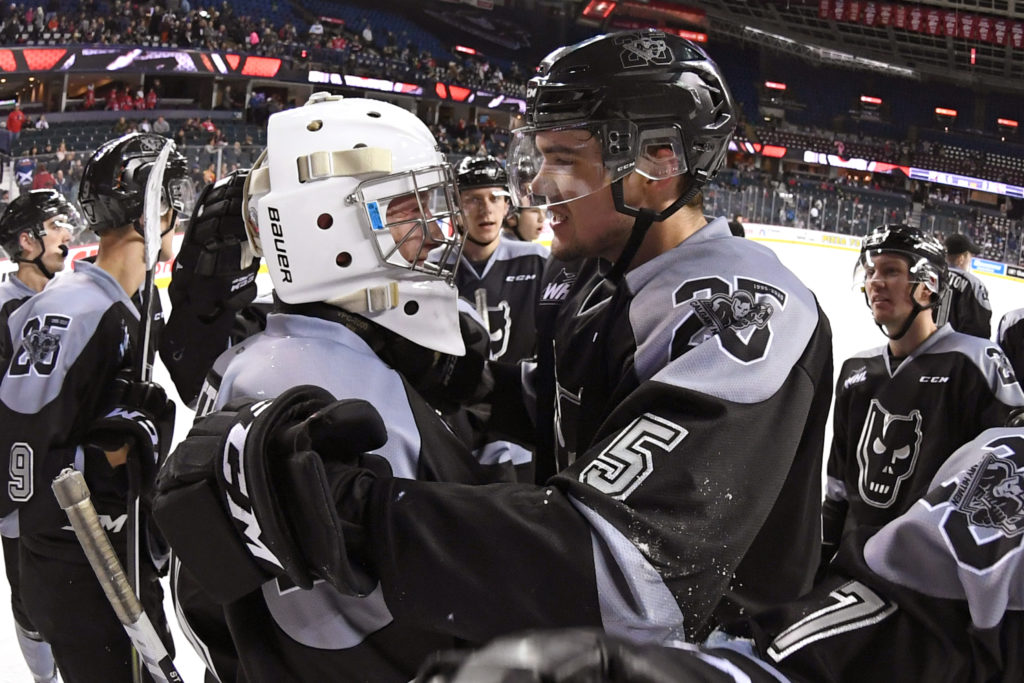 What a flip of the switch it was.

The Hitmen found themselves down 3-0 early on, but then proceeded to score six unanswered goals en-route to a 6-3 win over the Medicine Hat Tigers Sunday afternoon at the Scotiabank Saddledome.

They needed a spark and got just that when Brayden Peters came in for relief eight minutes into the contest and gave the team a major shot of adrenaline with his effort.

“It was a great performance from him,” head coach Steve Hamilton said. “He’s a great competitor and has an amazing work ethic and the guys really rallied around him.

“The boys recognized how hard he was working making some big timely saves and appreciated how important that was. He provided a boost and the group was excellent in the last 40 minutes.”

Jackson van de Leest had a team-high three points with a goal and an assist while Mark Kastelic and Riley Stotts both scored a pair of goals and Carson Focht added a single marker for the home side. Peters stopped all 26 shots fired his way and even chipped in with an assist to earn his first win of the season.

Cole Sillinger also had a three-point night with a goal and two assists while Ryan Chyzowski found the back of the net twice for the visitors. Mads Soogard stopped 36 shots in the loss.

With two of the first three goals scored on the power play by the Tigers, the Hitmen settled in and did their job limiting the penalties for the rest of the afternoon and took charge.

It all started when van de Leest scored late in the first period off a one-timer from the point to bring the Hitmen within two, and that goal was the one that got the goal scoring party started.

“We had a great regroup and felt like we had enough energy to come out and flip the switch,” van de Leest said. It was important to get our competitive nature going and get back to what we do best and we rolled with the momentum after the first period.

“These games are huge and points that we need. Every game is important but this one was definitely big.”

After tying things up headed into the third period courtesy of Focht and Kastelics goals, the Hitmen would then jump with two goals just over a minute a part in the third period with the game-winner bouncing off Kastelic’s leg and into the net, and the insurance marker on a wrap around by Stotts before the 19-year-old sealed the deal on a rebound shot in the crease six minutes later.

They took the lead with force and never let up.

“We have to be very honest and direct and I think we did that after we got our feet going,” Hamilton said. “We found our groove and style and just got back to what Hitmen Hockey is all about.

“You never want to be a team to sit back or go into a shell, that’s a tough way to play. It was an aggressive approach and it was good to see everyone on the same page.”

The 17-year-old Peters then stood tall making big saves including one on an odd-man rush making two stops to keep the Tigers stuck at three.

It’s never easy for a goaltender coming in cold in relief, but he looked right at home in the process.

“I just needed to get the first shot out of the way, a lot of times that first save sets the tone for the game,” Peters said. “It can be tough settling in but I felt good in there and the team did a great job in front of me.

“I didn’t feel any pressure coming in, I just wanted to give the team a much needed boost. The fans helped, hearing them cheer every time I made a save gave me confidence and helped me push through.”