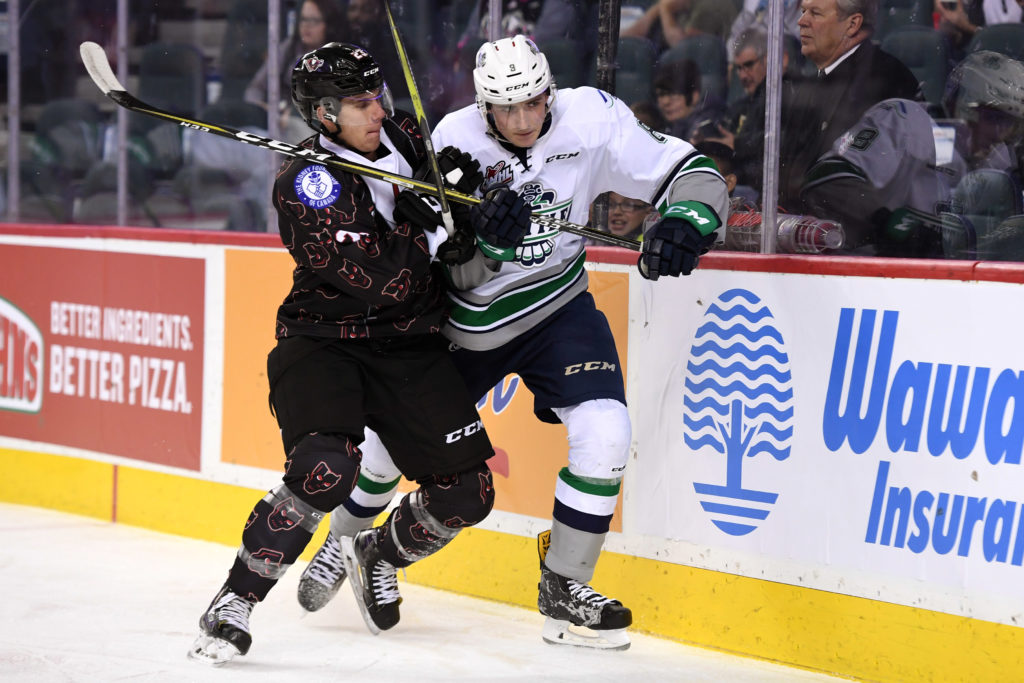 Just one play late in the game changed everything.

The Seattle Thunderbirds defeated the Hitmen 4-3 Saturday night, handing the Hitmen their third straight loss and sent them to 4-10-1 on the year.

After trailing 3-0 headed into the final frame the Hitmen stormed back to tie it up at three, but the T-Birds would score with 42 seconds left for the win.

“At the end of the day we have to stay level headed and play the same way for 60 minutes,” Mark Kastelic said. “It was a good response but we need to tighten up especially in the end.”

“It’s a lot of little adjustments to get better.”

Jake Bean, Vladislav Yeryomenko and Kastelic all scored for the Hitmen in the final frame to set up a photo finish. Matthew Armitage finished the contest with 27 saves in his second consecutive start and third in his WHL career.

After nothing during the first period, the Thunderbirds would open the scoring in the middle stanza when Armitage would stop the initial point shot but Bargar was there to bury the rebound to put the visitors up.

The T-Birds would then double their lead with a Harsch point shot finding its way through a crowd on the powerplay. Just five minutes later, Neuls would find the back of the net for his second of the season also on the powerplay to make it 3-0 after 40.

With 13 minutes left in the game, that’s when the comeback would start.

Bean would score his first goal of the season going top shelf on the backhand after taking the pass from Cael Zimmerman to cut the deficit to just two.

Yeryomenko would then bring the Hitmen within one after taking a pass from Jakob Stukel to beat a sprawling Hughes. The goal was Yeryomenko’s second straight after scoring in Lethbridge on Friday night.

Just a minute later while on the powerplay, Kastelic would tip Yeryomenko’s point shot to tie the game up to send the ‘Dome crowd to their feet.

A late powerplay saw the Hitmen given the chance to take the lead for the first time in the game, but immediately after the T-Birds killed it off, Strand would ice the game with the quick one-timer in the slot.

“Guys have to start digging into the details and it starts in practice,” Bean said. “It’s the little things we need to pay attention to.”

“We have to start bearing down a bit and that starts within.”