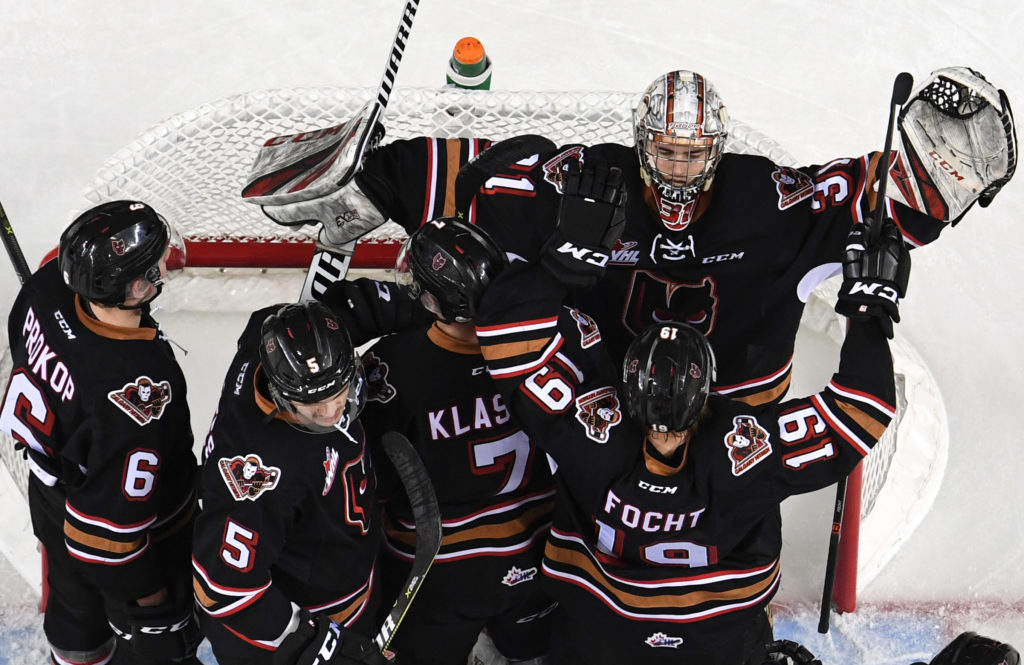 Saturday night at the Nicholas Sheran Arena saw the Hitmen hold on for a 6-5 win and now take a 3-2 series lead headed into Game 6 Sunday afternoon back at the Scotiabank Saddledome.

Mark Kastelic returned after missing the past two games and responded in a big way with a three-point night with two goals and an assist. Luke Coleman, Josh Prokop, Vladislav Yeryomenko and Cael Zimmerman added single markers. Jack McNaughton ended with 29 saves to help the Hitmen secure the win.

Lethbridge meanwhile saw Jake Leschyshyn score a pair of markers with Jordy Bellerive, Nick Henry and Logan Barlage chipping in with goals. Goaltenders Carl Tetachuk and Bryan Thompson both split the duties in net as Tetachuk made 32 saves and Thompson ended with four.

After jumping out to a 2-1 lead after the first 20 minutes, the second period was fast and furious which saw seven goals combined between the two clubs. The Hitmen were able to jump out to a 4-2 lead but the ‘Canes were able to tie the game up thanks to a pair of power play markers.

But the Hitmen would bounce right back.

With 2:09 left to play in the second stanza, Zimmerman took the feed in the high slot and fired a wrist shot blocker side for a 5-4 lead. With just 26 seconds left, the captain would strike again for his second marker of the night to reclaim the two-goal lead.

When the third period rolled around, only one goal found the back of the net as the Hitmen dialled in defensively to shut down the Hurricanes attack, especially when it mattered most. With a 6-on-5 advantage for Lethbridge, the Hitmen crowded in as Kastelic made a game-saving block in the dying seconds to secure the victory.

After falling behind 2-0 in the series, the Hitmen have rebounded to win three straight games and will now look to close the series out. They knew that the first step they needed to win the series was to win on the road and they’ve done just that.

Now the next step is to take care of business on home ice in Game 6.