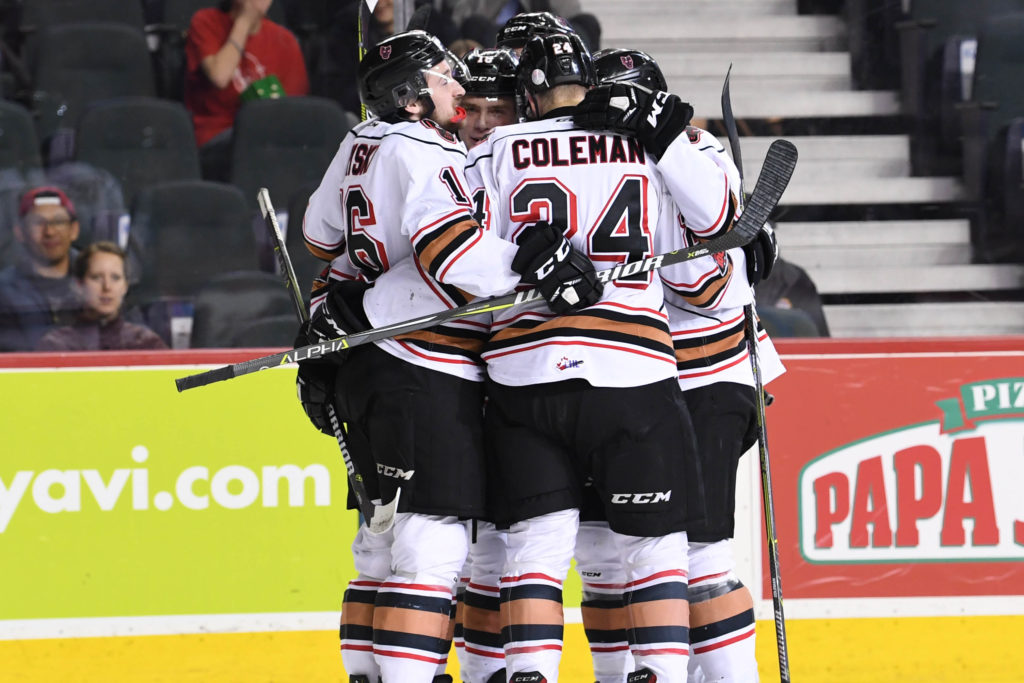 He got his wish.

The Hitmen made sure that his return to Seattle was a successful one as they came away with a 5-2 win over the Thunderbirds Friday night.

Mark Kastelic scored a pair of markers to now sit at a team-leading 21 goals already on the season while Luke Coleman also scored a pair into empty nets to lead the way. Carson Focht also chipped in with a goal and an assist, and former Thunderbird Carl Stankowski put on a strong performance ending with 24 saves.

For Seattle, Matthew Wedman and Zack Andrusiak scored while Liam Hughes made 31 saves.

Riding high on their last win against the Winterhawks, the Hitmen would strike fast as Kastelic would stick with the play after Luke Coleman was stopped on a breakaway to put away the rebound four minutes into the game.

Just two minutes later, the captain would score again this time on a powerplay as he unloaded a wrist shot short side for his second of the night.

With a career-high 23 goals scored last season, Kastelic now sits just two goals away from the mark just 25 games into the year.

Starting the second period, the Hitmen would need only two minutes to add to their lead as Josh Prokop picked up the puck from behind the net and found Focht alone in the slot which he made no mistake burying his fifth of the season.

Seattle would get one back five minutes later when Wedman intercepted a pass at the Hitmen blueline and raced down the other end to score on a breakaway to cut the lead down to two.

Things would get interesting in the final frame as the T-Birds would get within one with 10 minutes left in the game as Andrusiak snapped a wrist shot in the high slot into the top corner.

As the Hitmen would continue to press for the insurance goal, they found themselves on the penalty kill but were able to kill it off which proved to be huge for momentum as Coleman would score two empty net markers to seal the deal.

Special teams played a factor as the Hitmen capitalized on one powerplay on two opportunities, while killing off all seven Seattle man-advantages.

The win now sees the Hitmen sit just one point back of the Medicine Hat Tigers for the final wildcard spot and four back of Lethbridge for third in the division.

Saturday night will see the U.S. portion of the trip wrap up against Tri-City as the Hitmen will look to build on a trip which finds them 4-1 so far.