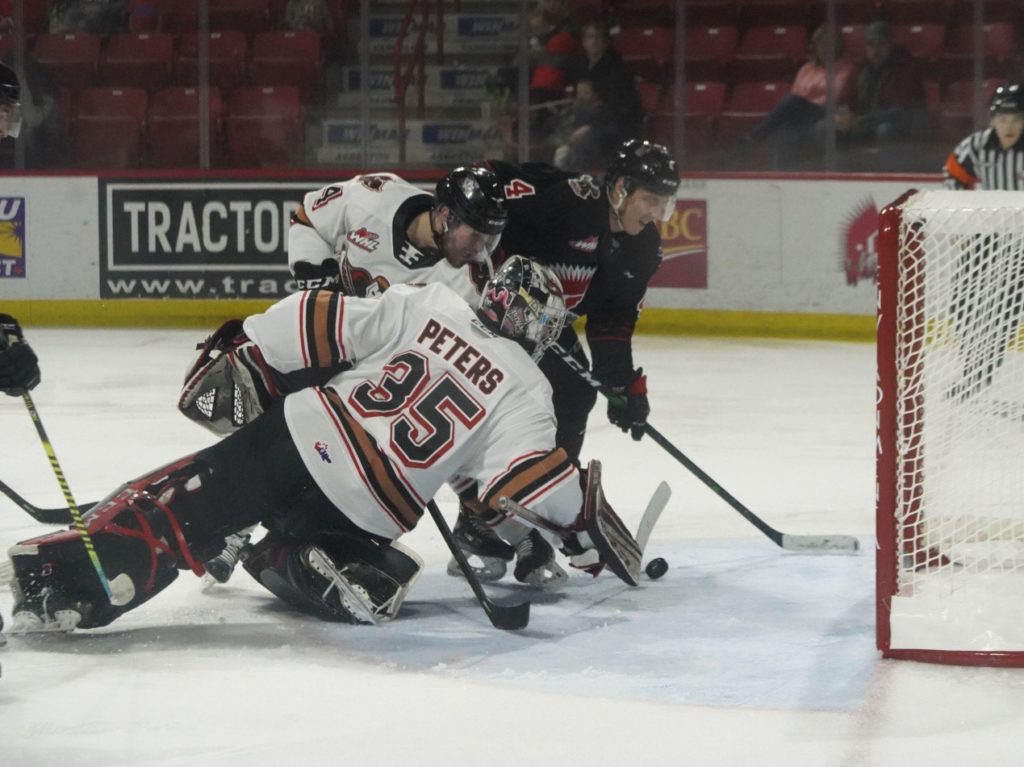 Away from home, no problem at all.

The Hitmen wrapped up the five-game game road trip with a convincing 4-1 win over the Moose Jaw Warriors Saturday night for their third straight win.

When it was all said and done, the Hitmen finished the swing 4-0-1 picking up nine out of a possible ten points, an impressive feat.

Jonas Peterek, Orca Wiesblatt, Mark Kastelic and Jett Woo provided the markers for the Hitmen with Woo adding an assist to tie with Egor Zamula, who had two assists, for a team high two points. Brayden Peters needed just 17 saves to pick up his fourth win of the season.

Cole Jordan scored the lone goal for the Warriors while Adam Evanoff stopped 27 shots in the loss.

Similar to Friday night in Brandon, the Hitmen came out flying outshooting Moose Jaw 14-2 in the opening frame and were rewarded for their efforts as Woo lead the rush and found an open Peterek cross ice which then saw the import forward snap a wrist shot into the low right corner for the early lead.

Just over a minute and a half into the second period, the Hitmen came in on the rush again as Evanoff made the initial save off of a Josh Prokop shot but then Carson Focht centered a pass to Wiesblatt who banked a shot off of the Warriors goaltender and in to extend the lead by two.

After Moose Jaw was able to cut the lead down by one, the Hitmen didn’t let up and struck with two minutes left in the frame as Riley Stotts fired a wrister that snuck past Evanoff wide of the post but Kastelic was right there on the door step to corral it and quickly pop it into the cage for his team-leading 16th goal of the season.

It was then time for the former Warrior to get in on the goal-scoring party.

Good things happen when you throw pucks on net and the defender was the benefit of that saying as he threw a pass into the slot that hit a Warrior skate and into the net for his third of the season.

It was quite the milestone night for Woo as he skated in career game number 200 in the WHL and extended his point streak to four games with the two-point performance.

The Hitmen now sit at 13-6-2-1 on the season with 29 points and now just four points out of first place in the Central Division with three games still in hand.

And now, they’ll look to continue the winning ways on home ice next Friday night at 7 pm when they welcome the Regina Pats to begin a three-in-three weekend.