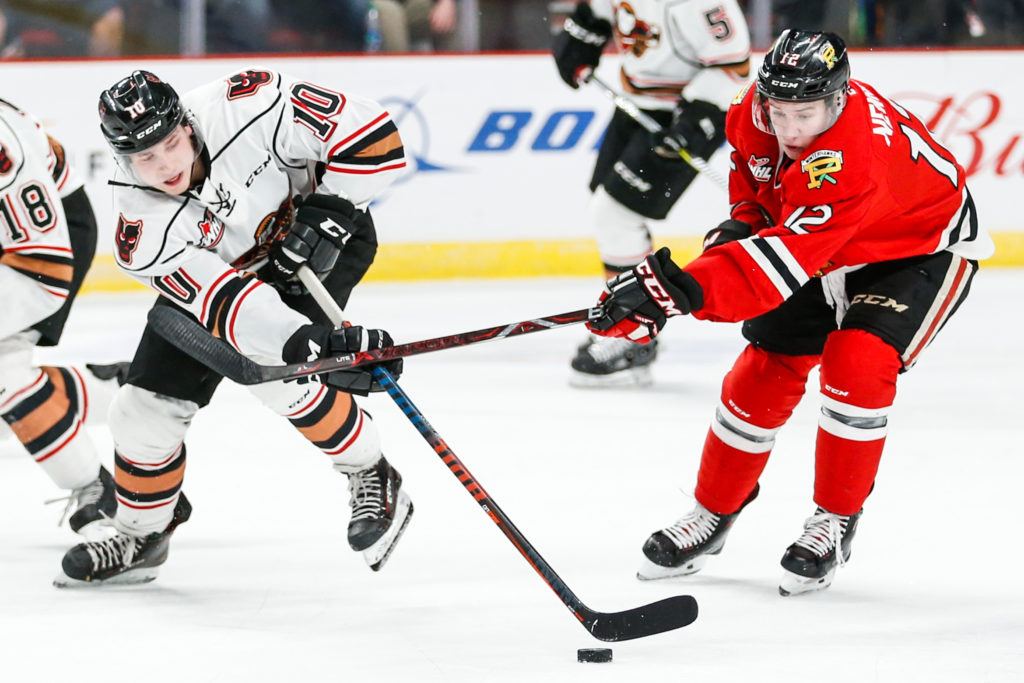 Wednesday night saw the Hitmen hold on for a thrilling 3-2 victory over the Portland Winterhawks to improve to 3-1 on their seven-game road swing.

Jake Kryski, James Malm and Riley Stotts provided the markers while Carl Stankowski was spectacular in goal making 38 saves for his fifth win of the season.

For the Winterhawks, Cody Glass and John Ludvig scored and Shane Farkas ended with 25 saves.

The clash between the two clubs was much different for the Hitmen compared to their last game, as the chances went back and forth with the speedsters coming out to play. Nine minutes into the game, Portland would strike first as Glass walked in and had a clear lane to snap a wrist shot that caught the inside of the post and in to give the home side the lead. Dakota Krebs nearly got the Hitmen back even but his slap shot from the point rang off the post and out.

After Portland saw two powerplay opportunities fail to muster up any offence, the Hitmen would take advantage on a powerplay of their own that saw Kryski cut in on a partial break and slide the puck past Farkas for his 11th goal of the season.

With the game knotted up headed into the final 20 minutes of regulation, the Hitmen would go out on the attack. After a failed clearing attempt out of the zone by the Winterhawks, Malm was left alone at the side of the goal and backhanded a perfectly placed shot over the shoulder of Farkas three minutes into the stanza.

And, as the old saying goes, good defence leads to offence.

After killing off yet another penalty, Cael Zimmerman would step out of the box and spring Stotts on a breakaway that the centreman would make no mistake on giving the Hitmen some breathing room.

The Winterhawks would make things interesting with five minutes left to go, as Ludvig jumped up in the play and was left uncovered and would capitalize to get them back within one.

Both Kaden Elder and Mark Kastelic seemed to have score goals in the final two minutes of the period but both were waved off for kicking the puck in, but it didn’t matter as the Hitmen were able to hang on for the win.

Stankowski once again was a big reason why his team got the two points, making numerous highlight-reel saves including batting the puck out of mid-air with his goal stick. The netminder has now won three of his last four starts.

The Hitmen will now enjoy a day off before returning to action Friday night against the Seattle Thunderbirds, and will then wrap up the U.S. portion of the trip Saturday night in Tri-City.