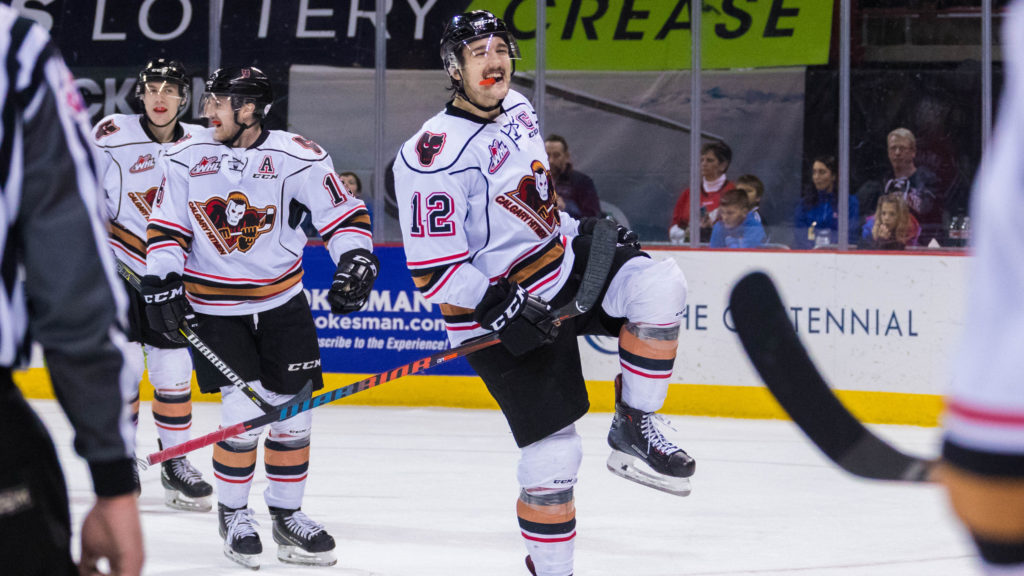 Following a 5-0 win over the Kootenay ICE to open up the road trip, the Hitmen followed it up with an impressive 5-1 win over the Spokane Chiefs Saturday night to extend the win streak.

Mark Kastelic scored his first career WHL hat-trick to lead the Hitmen attack while Riley Stotts chipped in with a pair of goals. James Malm added three assists and Egor Zamula extended his point streak to four games with two assists. Carl Stankowski was a big reason why the Hitmen picked up the two points stopping 33 shots in a second star performance to pick up his fourth win of the season.

The Hitmen carried over their strong play from the previous night as they jumped onto the attack and would strike on the powerplay with six minutes left in the opening frame as Kastelic would go with the wrap-around to beat Weatherill.

Kastelic’s second marker came off an identical set play again on the powerplay as he sat from beneath the goal line but this time threw the puck off Ty Smith that would find its way into the back of the net.

The Chiefs would get back within one on a powerplay of their own, with a 4-on-2 rush that saw Beckman finish off with a one-timer. Kastelic would restore the two-goal lead just two minutes later and with 24 seconds left in the stanza to complete the hat-trick.

Similar to Friday night in Cranbrook, the Hitmen would find a quick strike in the final 20 minutes as Stotts was left all alone in front after Malm set him up beautifully that the Toronto Maple Leafs prospect would capitalize on.

The Hitmen continued to frustrate the Chiefs offence with their smothering play while Stankowski made several key saves to keep hold of the lead. The 18-year-old goaltender was particularly busy in the final frame stopping all 13 shots fired his way including a remarkable stop off a redirect in front.

Kastelic’s three goal night has the captain in a tie for second in the entire league with 19 goals in just 22 games.

With the win streak sitting now at three, the Hitmen matched the streak they picked up in October and will now look to continue to roll Tuesday night in Everett. The clash against the Silvertips will start a stretch of four games in just five days.