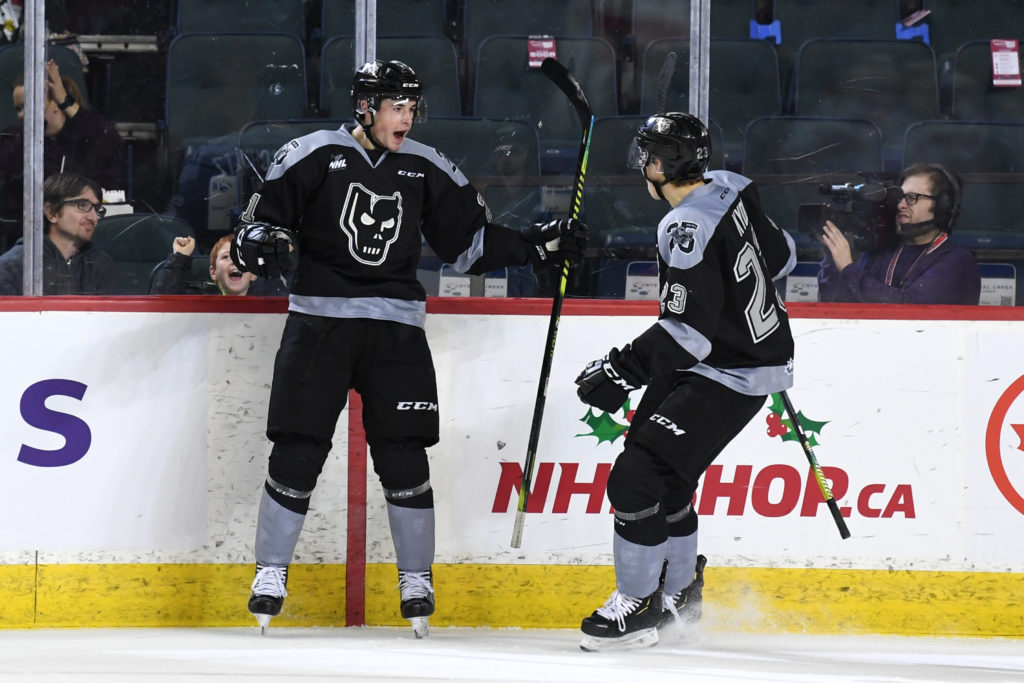 No better way to head into the break.

The Hitmen got their revenge with a 5-2 win over the Lethbridge Hurricanes Sunday afternoon at the Scotiabank Saddledome to enter the holiday break on a high note.

With a dominating opening 20 minutes, you could tell how much they wanted this one.

Riley Fiddler-Schultz led the charge with his first two goals of the season, while Carson Focht, Riley Stotts and Josh Prokop added single markers. Goaltender Jack McNaughton needed just 15 saves to help backstop the club for their 16th win of the season.

D-Jay Jerome and Justin Hall replied for the ‘Canes with Carl Tetachuk ending with 11 stops before being replaced by Bryan Thomson making 22 saves in relief.

After Saturday night saw the Hitmen fail to solve Tetachuk in Lethbridge, this time they were able to find the back of the net early and often on the netminder.

After their initial power play stalled out, Fiddler-Schultz came down the wing just seconds after the man-advantage expired and snapped a laser finding the sweet spot of the top right corner for the early lead.

13 minutes later, it was time for the power play to have some fun.

With the Hitmen setting the play up in the zone, the initial shot by Prokop was stopped, but the rebound was kicked right onto the stick of Focht who made no mistake in scoring his first goal in five games.

Goals early and late in a period provide the biggest boost and the Hitmen got just that as Stotts fired an innocent looking wrist shot with a ‘Canes defender drapped all over him but it took a friendly bounce to sneak past Tetachuk.

The Hurricanes got one back in the second frame as Jerome made no mistake on a breakaway to cut into the deficit. The third period however saw the Hitmen pick up where they started as Fiddler-Schultz took the feed from Blake Allan on a two-on-one shorthanded and finished it off with a one-timer.

After the penalty killers did their job, the older Prokop brother took off on the left side and unleashed a strong wrister into the top right corner to seal the deal for the Hitmen.

Fiddler-Schultz On His Two-Goal Game

“It was a great feeling to get back on the score sheet. Obviously to do that against a rival makes it even better. It was a great heads up play by Blake to not fire it down the ice and recognizing we had the odd-man rush. It was a great pass to slip it past the defender and it was an easy tap in goal for me.”

Steve Hamilton On Bouncing Back From Saturday

“To get off to the solid start like we did in the first period was a good recipe for us, we didn’t have to trail the game. All phases of the game worked well for us and you’re going to win a lot of games when you do that. Our energy was high and to get those early ones was huge for us especially after we didn’t generate a lot of offence last night.”

Fiddler-Schultz On The Work Of The PK

“We did a great job on the penalty kill and we knew that we needed to shut them down with how much of a great power play they have. That’s the driver for them offensively and taking that asset away from them, that was big for us.”

Josh Prokop On Heading Into The Break With A Win

“It’s nice to even the season series out and we’re pretty confident going up against them. We left two points on the table last night and the emphasis today was that we needed these points. With how busy the stretch is coming back from the break, you want to have some confidence in beating divisional teams especially when you see them so much.”