Hitmen Tame Tigers In A Shootout 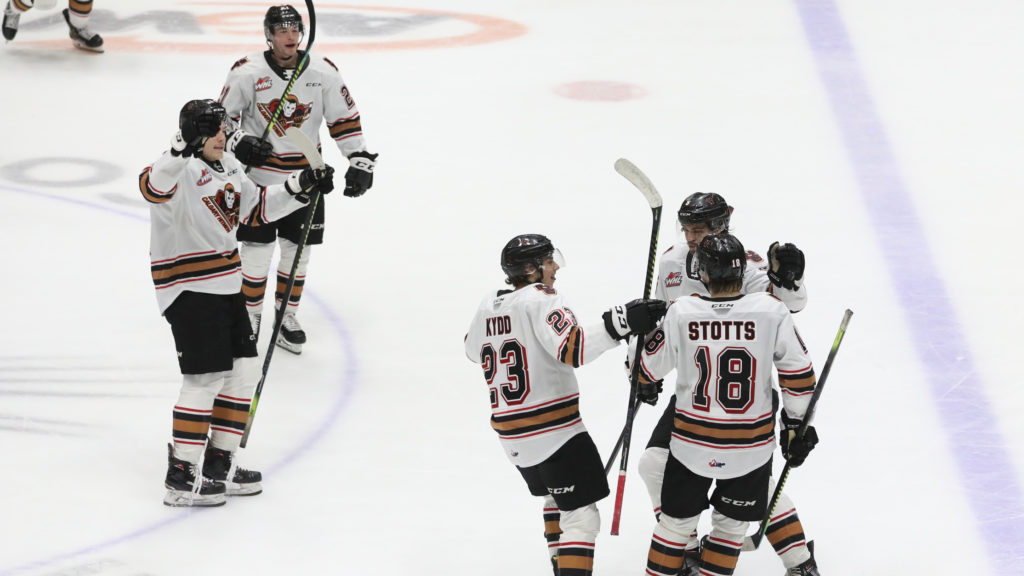 They would not be denied on this night.

The Hitmen were determined to end the weekend series against their rival Medicine Hat Tigers with a win, and did just that with a thrilling 5-4 shootout victory.

Riley Fiddler-Schultz finished with three assists while Sean Tschigerl notched his first career two-goal game in the WHL to lead the scoring attack.  Cael Zimmerman and Orca Wiesblatt also found the back of the net for the Hitmen while captain Josh Prokop chipped in with two helpers. Riley Stotts scored the winner in the skills competition in round three to secure the two points while Jack McNaughton made 29 saves to backstop his club.

Oren Shtrom was the top performer for Medicine Hat with a pair of goals.  His second of the night on a third period power play with 5:47 remaining forced extra time.  Corson Hopwo and Brett Kemp also scored for the Tigers who saw their five-game winning streak come to an end.

Prokop (2G, 5A) and Tschigerl (4G, 3A) extended their point streaks to five-games with their performances, and the Hitmen were finally able to score with the man-advantage, thanks to Wiesblatt’s marker on a five-on-three in the third period. The Hitmen finished 1-for-4 on the power play while Medicine Hat ended 2-for-5.

Finishing the weekend set at 1-1-1, the Hitmen will now look ahead to their next series against the Red Deer Rebels for a trio of games beginning Friday in Central Alberta before returning home on Sunday at the Seven Chiefs Sportsplex on Tsuut’ina Nation.