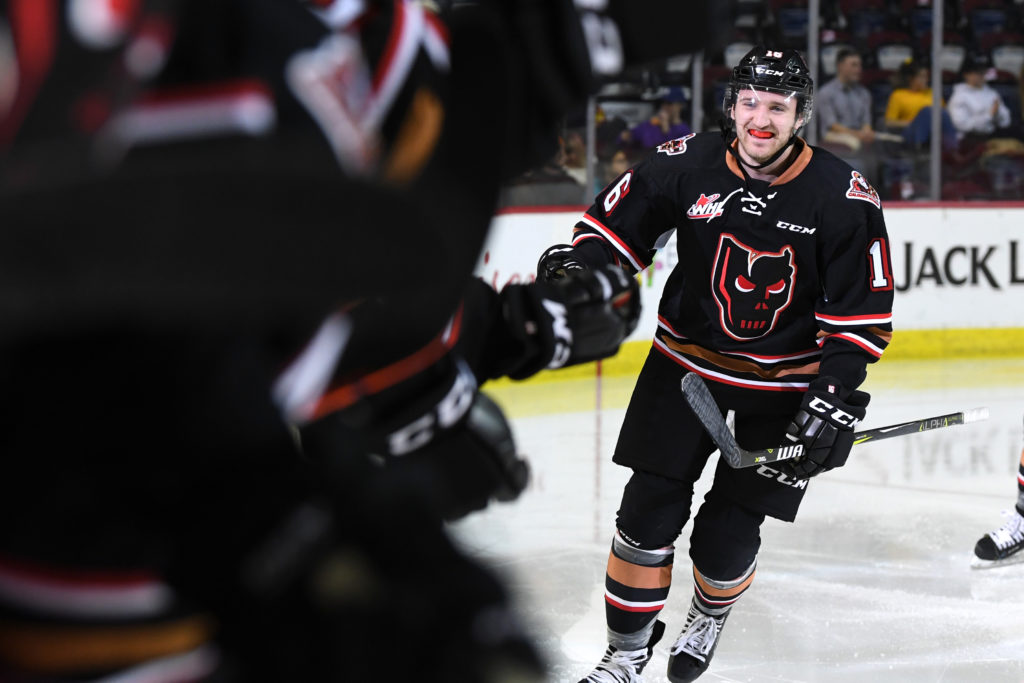 In their first game on home ice in 20 days, the Hitmen made sure the home crowd didn’t go home disappointed with a 4-3 overtime win over the Edmonton Oil Kings.

What made the victory extra sweet was winning it for head coach Steve Hamilton against his former club.

“It was a good win for Hammie and he was fired up for it,” Jake Kryski said. “It feels nice to come back home after the long trip and get the win.

“It gives us a lot of confidence moving forward and hopefully we can carry over the success we had on the road here at home.

Kryski continued his strong play, extending his point streak after a three-point performance (2G, 1A) to lead the offence. Bryce Bader scored his first career WHL goal while Kaden Elder was the hero, scoring the overtime winner at the 2:30 mark. Jack McNaughton was excellent for the Hitmen, making 26 saves and key stops to ensure the Hitmen came away with two points.

McNaughton had to make just one stop in the extra session but it proved to be massive.

“When he decked around the defender I thought to myself ‘oh jeez I don’t want to end up on a highlight reel here,’” he said. “Overtime can be nerve wracking because it’s sudden death. If you don’t make the save it’ all over and that’s a lot of pressure.

“Winning in overtime definitely gets you more fired up like tonight did.”

The Hitmen built period leads of 2-1 and 3-2 but the Oil Kings were able to respond and 60 minutes solved nothing. With the game on the line, the Hitmen pressed on the pressure when Elder finished things off.

And what a goal it was.

“Elds made it a great play winning the battle for the puck to start it all,” Kryski said. “I saw him breaking for the net and went for that shot-tip pass. It was a little bit of a Henrik to Daniel play and when it went in it was exciting to see.

“Overtime is always a good time when plays like that come together.”

The Hitmen will now wrap-up the weekend Sunday afternoon when they welcome the Moose Jaw Warriors to the Scotiabank Saddledome. With both clubs in the midst of three-in-three  weekends, it’ll be an even playing field with two big points on the line.

“We’ve always responded well particularly on the road when it comes to coming out strong on short rest and we’re going to need to translate that on home ice,” Hamilton said. “We need to be mentally ready and its funny how the body responds when you’re mentally focused.

“It was a big win tonight and I’m proud of the boys for pulling it off.”