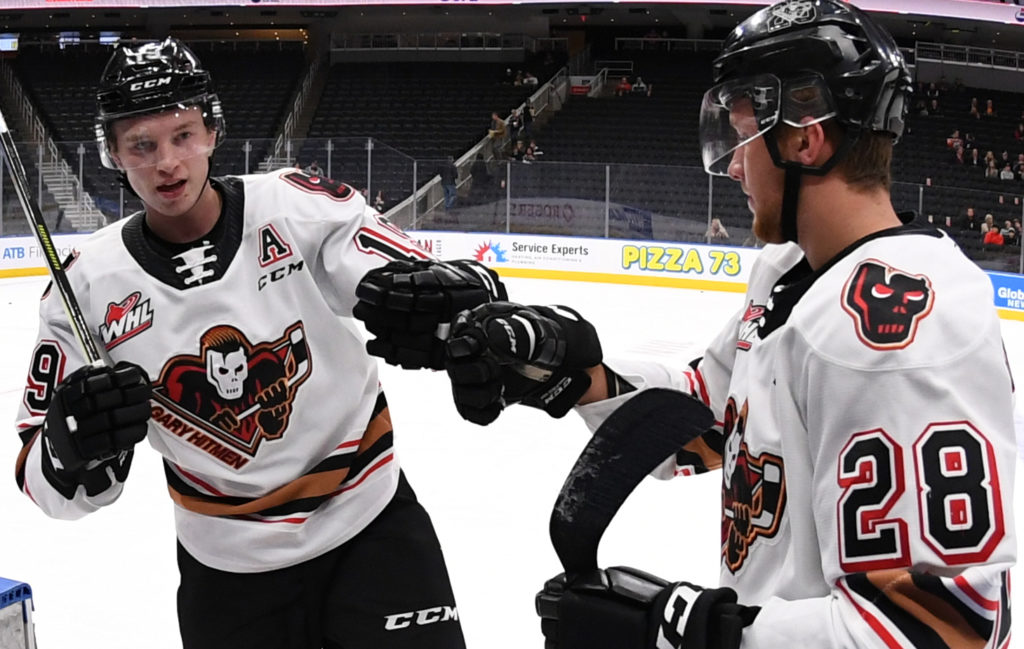 The points keep on racking up.

Friday night at Westoba Place saw the Hitmen continue their success on the road with a thrilling 4-3 overtime win over the Brandon Wheat Kings for back-to-back wins.

Orca Wiesblatt scored twice and Blake tallied the other marker in regulation which then saw Carson Focht score the overtime winner with 1:20 left in the extra session. In his second straight start, Jack McNaughton made 31 saves to help improve the Hitmen record to 12-6-2-1 on the season.

The Hitmen came out firing with a strong start as Wiesblatt would play a little give and go with Egor Zamula that fooled the Wheat Kings goaltender and the 19-year-old would make no mistake in firing it into the back of the cage for a 1-0 lead. Just before the period ended, the trio of Blake Allan, Hunter Campbell and Wiesblatt went to work on the forecheck which then saw Campbell fire a bouncing puck on goal that hit Allan on the way and in for his third of the season.

With a 2-0 lead headed into the middle frame, it was a different story as the Wheat Kings took control of the game and capitalized on their chances scoring three unanswered goals to take the 3-2 lead into the final 20 minutes of regulation.

Just 51 seconds into the third, the Hitmen got back even.

With Wiesblatt back on a line with Focht and Josh Prokop, the trio would strike setting up on the rush as Jett Woo froze everyone and found a wide open Wiesblatt backdoor for the tying goal.

Chances went back and forth for the remainder of the period but for the second time in three games for the Hitmen, overtime was needed.

The Hitmen had their fair shares of golden opportunities with the best one coming off the rush as Focht used a defender as a screen but fired a shot off the crossbar. But moments later, the Vancouver Canucks prospect came in off the rush and this time was able to squeeze a shot through Kruger for the game winner.

With now seven points out of a possible eight picked up in the last four games, the Hitmen will look to keep things rolling Saturday night in Moose Jaw to end the road swing.