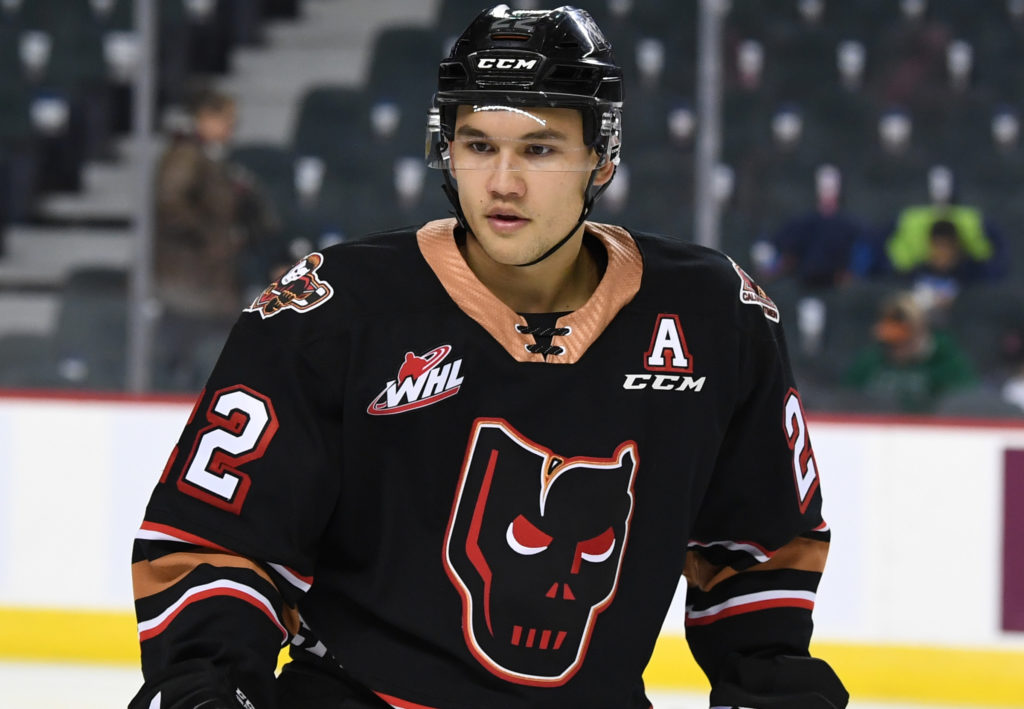 This Jett has been soaring.

With 22 games under his belt in a Hitmen jersey, defenceman Jett Woo has without question added another element to the blueline with his mix of offensive skill, physicality and strong defensive play.

It’s been quite the journey for the 19-year-old who just skated in his 200th career WHL game on Nov. 23 in Moose Jaw.

“A few games leading up to the milestone I checked and saw that it was going to be there and it’s only fitting that it happened back where it all started,” he said. “It was a special night for me and a unique experience playing against the team that bred and brought me up.

“I took a moment to look around knowing it would be my last time playing in that rink. It was memorable and even better that we were able to get the win.”

Skating in his fourth season in the WHL, the Manitoba product has had his fair share of memories that he’ll always remember and even to this day, it’s all the firsts that he experienced in the league that come to mind right away.

“I remember my first career game, goal and point. My first point was when I was 15 and I just chipped the puck off the glass and I got the secondary assist, nothing too flashy,” he laughed.  “It’s funny how I remember all of that like it was just yesterday.

“The years have gone by pretty quick and I’m happy where my game is and look forward to seeing it evolve even more.”

The Vancouver Canucks prospect has been heating up with points in four straight games (2G, 3A) and is closing in on a milestone, sitting just two assists away from 100.

“Last year I got my chances to be more offensive and that was a big step for me to grow in that end,” Woo said. “With that being said, I’ve always been a big believer in there’s no offence without good defence. You have to get the puck out of your zone first and that’s the biggest part of my game I take pride in.

“It’s nice to get on the score sheet and help the team offensively and I just want to be strong in all areas to help the team win.”

Alongside import defender Egor Zamula, the duo has continued to impress with their play and chemistry that has built up so quickly.

With how dangerous they are it gives the coaching staff the luxury to play them in all situations and even switch up the pairings for some different looks which they have taken advantage of.

Overall, it’s a strong core that will only get better.

“We have a great defensive group with each guy bringing something different to the table,” he said. “With Egor, we have gotten more comfortable playing together and getting used to each other’s play style which all started with bonding off ice.

“The best way for a team to prosper is to create chemistry, strong friendships and having some fun. We are definitely having fun with this roll we’ve been on and it’s a very tight knit group. I feel very fortunate to be a part of it.”