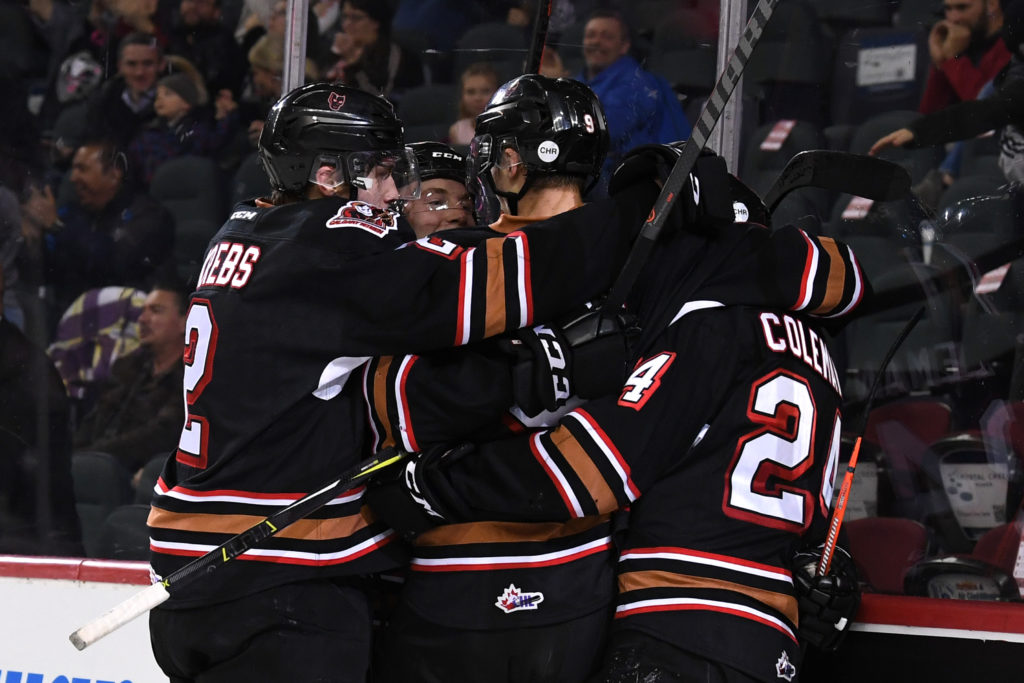 And the Hitmen did just that.

Friday night saw the Hitmen come out on top for a 3-2 win over the Swift Current Broncos to extend their winning streak to three games.

With the game tied up late, the Hitmen got the bounce they were looking for with just 23 seconds left as Josh Prokop banked a centering pass off a defender that found its way in.

“We started talking about this game early in the week knowing that they were going to play hard,” head coach Steve Hamilton said. “You can’t have the expectation that you are going to walk over them and I thought the guys did a good job of sticking to the gameplan.

“It was nice to get some puck luck late with the game-winner.

Riley Stotts and Egor Zamula chipped in with markers in addition to Prokop’s sixth of the season, while Jack McNaughton wasn’t as busy as he had been in his recent starts, needing just 11 saves to pick up the win.

For the Broncos, Ethan O’Rourke and Joona Kiviniemi scored for the visitors and goaltender Isaac Poulter kept his club in it all night making 42 saves.

“Their goalie played amazing,” Stotts said. “We couldn’t get much by him and he stood on his head. Getting that bounce at the end was huge for us and it was huge to get the two points.

“He made some good saves and a really nice one on me that’ll probably end up being number one on the top ten.”

It was one of those nights where the Hitmen dominated the play and threw everything on net but couldn’t pull away.

With 20 shots on goal in the third period alone, something had to give and there was a buzz knowing that the hard work was about to pay off.

“It felt really good to see it go in,” Prokop said. “I’ve had chances all year and getting the bounce tonight was big for me with the last nine or ten games not going how I would have liked personally.

“We worked so hard all game and outplayed them so it felt good to get rewarded for our play. It felt great to get the win at home and know that if we keep getting wins at home we can become a dangerous team.”

With the win, the Hitmen now sit just two points back of Medicine Hat for a wildcard spot and are only one game back of being back to .500, which they can get to with a win Sunday afternoon when they welcome the Kamloops Blazers.

It may be The Brick Teddy Bear Toss, but the two points and full 60 minutes is the focus.

“The goal is to get to 35,000 bears and that’s pretty special,” Hamilton said. “The event is important but the game itself is also very important.

“We want to prioritize the game and it’s been a long time coming to scratch and claw into the mix and we want to continue to push forward.”