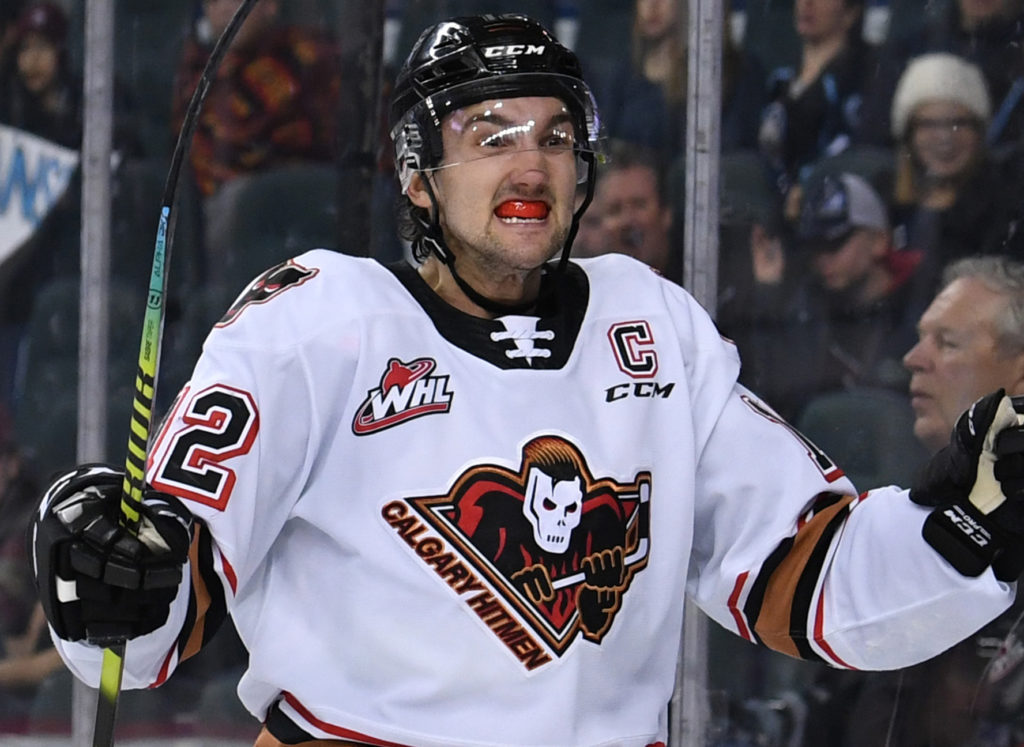 Hitmen captain Mark Kastelic has continuously been moving on up in the franchise record books since the start of the season and has shown no signs of slowing down.

It seems like with every game he’s either surpassing someone new on the lists or reaching significant career milestones.

“It’s pretty crazy,” Kastelic said. “It’s surreal looking back to when I came here for the first time when I was 15-years-old during training camp to where I am now.

“I never thought that I would play my whole career with one organization and feel very fortunate about it. It’s been an awesome journey and I’ve been completely honoured to be a part of the Hitmen organization.”

So far, his 112 goals has him fourth in the all-time goals list just ten back of Borys Protsenko for third, his 102 assists is good for 18th place, and his 214 points sees him one back of Ryan Getzlaf in cracking the top ten in that category.

When it’s all said and done, he will have left quite the mark on the franchise.

“It says a lot about my game, how I’ve gotten better with each season and grow as a person on and off the ice,” he said.  “It’s a testament to my hard work and nice to get the recognition.

“There are a lot of great players on those lists and to be mentioned with them is unbelievable.

“But honestly, I don’t look at the personal milestones too much and focus on the team success first and foremost. It’s definitely in the back of my mind and I’m very proud of my accomplishments but ultimately the focus is winning as a team.”

There’s no denying how amazing it has been to see the growth of a once shy and quiet Kastelic blossom into the captain he is today.

And a lot of the credit he gives for that goes to the veterans and leadership group he had when he first broke into the league.

“Colby Harmsworth, Keegan Kanzig and Jackson Houck were the guys I looked up to and great leaders that helped me as a rookie,” he said. “Guys like Travis Sanheim, Jake Bean and so many more impacted me in a positive way.

“It’s an honour to look back at all the great players I have had the privilege of playing with over the years.”

From 10 points to a career high 77 set last season, Kastelic has taken massive strides in developing his game. This season has been no different with 47 points (24G, 23A) through 42 games played.

He knows that time is slowly winding down before he graduates to the pro level, but that’s the last thing on his mind right now.

“I’m looking forward to having fun and enjoying the last half of my junior hockey career,” he said. “I have loved every minute of my time here in Calgary and all the moments spent with the boys.

“We want to keep getting stronger as playoffs approach and end it all with a championship.”