Orca Wiesblatt Named WHL On the Run Player Of The Week 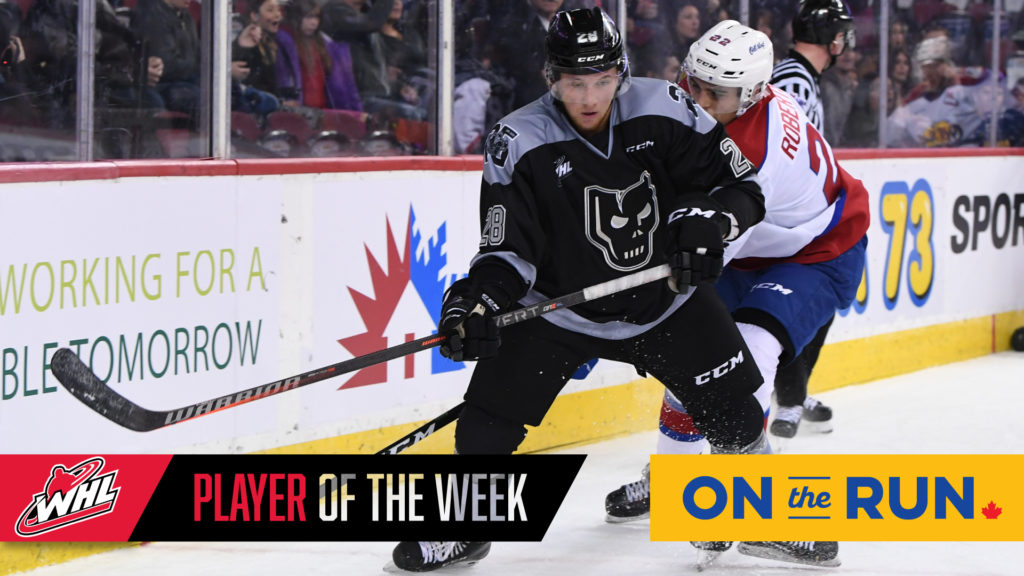 The Western Hockey League announced today that Calgary Hitmen forward Orca Wiesblatt has been named the WHL On the Run Player of the Week for the week ending October 20, 2019.

Wiesblatt recorded six points (3G-3A) and a had a plus-one rating in three games this week. Overall, the Hitmen finished the week with a 2-1 record, helping them keep pace with the top teams in the Central Division.

The 5-foot-10, 185-pound product of Calgary, Alta. opened his week with a goal in a Monday loss to the Saskatoon Blades.

In Friday’s 7-3 win over the Moose Jaw Warriors, Wiesblatt scored the first and fifth goals of the game for the Hitmen, also earning a primary assist on the game-winning goal. That performance earned him first-star honours for the game.

Sunday, he closed out his week with a pair of assists in a 6-3 come-from-behind win for the Hitmen over the Medicine Hat Tigers. Wiesblatt picked up primary assists on Calgary’s second and fifth goals in the contest.

The strong week extended Wiesblatt’s point streak to five games. In nine games this season, Wiesblatt has recorded 12 points (4G-8A), including one-game winning goal. Wiesblatt currently ranks second in team scoring and has been held off the scoresheet just once this season.

Originally listed by the Hitmen, Wiesblatt has recorded 28 points (9G-19A) in 70 games, including the one game-winning goal.

About the Western Hockey League
Regarded as the world’s finest development league for junior hockey players, the Western Hockey League (WHL) head office is based in Calgary, Alberta. The WHL consists of 22 member Clubs with 17 located in Western Canada and five in the U.S. Pacific Northwest. A member of the Canadian Hockey League, the WHL has been a leading supplier of talent for the National Hockey League for over 50 years. The WHL is also the leading provider of hockey scholarships with over 350 graduates each year receiving WHL Scholarships to pursue a post-secondary education of their choice. Each season, WHL players also form the nucleus of Canada’s National Junior Hockey Team.

Over 46,000 Students Take in TELUS BE BRAVE #EndBullying Event
3 days ago