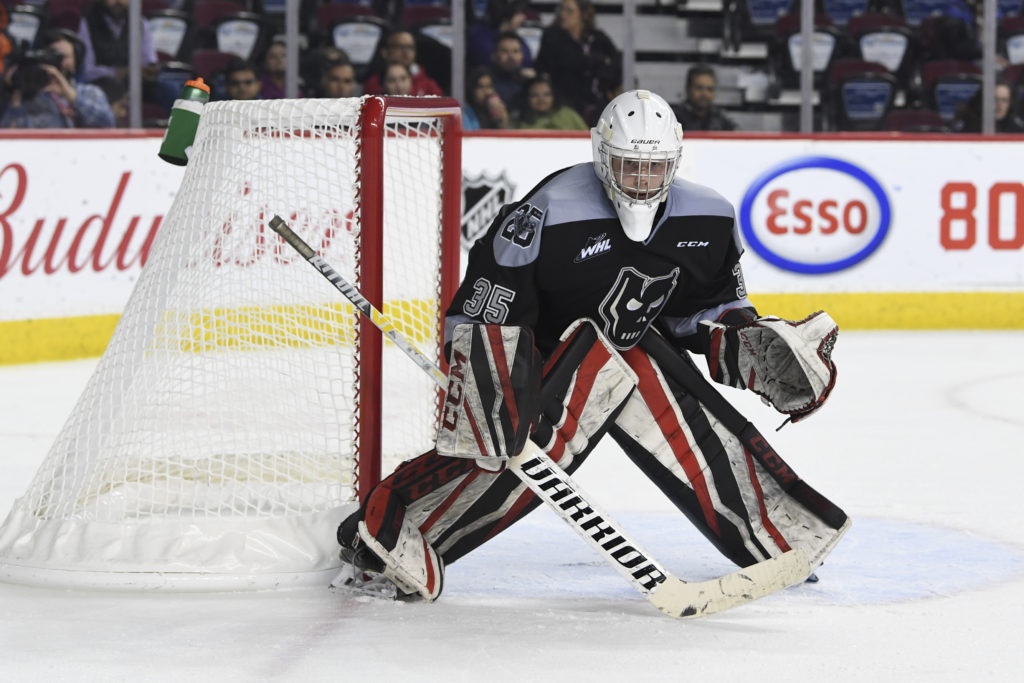 What a start it has been.

Hitmen rookie goaltender Brayden Peters knew that his opportunity would come to see some game action and there’s no doubt that he has made the most of his playing time, thoroughly impressing each outing.

And what’s been most impressive has been his drive to take his game even further.

“With it being my first year in the league I’m not expecting too much in terms of starts,” he said. “Any game I get the chance to start I always want to go in and prove myself as a goalie in this league. I want to show that I belong and give the team every chance to get the win.

“I don’t want to get complacent with where I am at, I know I still have to improve and want to grow my game.”

The 17-year-old had the luxury of spending time with the Hitmen last season appearing in two games which included his first career WHL win on Jan. 30 against the Swift Current Broncos.

The stint may have been a short one with the club before he went back to midget in Lethbridge, but a valuable experience nevertheless.

“It helped me get a feel of what the league is like,” Peters said. “I also made it a priority to get familiar with the players and coaches to get comfortable with everyone. Headed into this year I felt more at ease knowing that I knew everyone pretty well and it felt like I never left.

“With Jack (McNaughton) we grew closer in the off-season hanging out and having him come to Lethbridge for a goalie clinic. He’s helped me push along and given me pointers on what to expect from what he went through in his rookie year last season. He always has my back and it’s nice to have a solid bond.”

And of course, what’s a goalie without their superstitions.

“I get dressed the same way, throw a lacrosse ball around to get the hands going and I like to bounce it off the ice because it’s a white ball on white ice so it helps to work my eyes in tracking the play,” he explained. “During the game I go to the same corners, hit the posts when I get back into the net but that’s pretty much it.

“I try to keep it tame so I’m not too caught up in the superstitions and losing focus on the game.”

With a 3-2 record and appearing in three of the last four games, Peters has earned every minute of his playing time making big save after big save and owning a sparkling 1.86 goals-against-average and a .932 save percentage.

He’s been on top of his game and the home crowd has loved every moment of it.

“Hearing the fans cheer and go crazy will never get old,” he said. “I love it, it’s a big boost when you’re on your game and helps having them behind you and cheering you on with each save.

“It took a bit to get used to at first playing in front of that many people, but now I can’t get enough of it.”