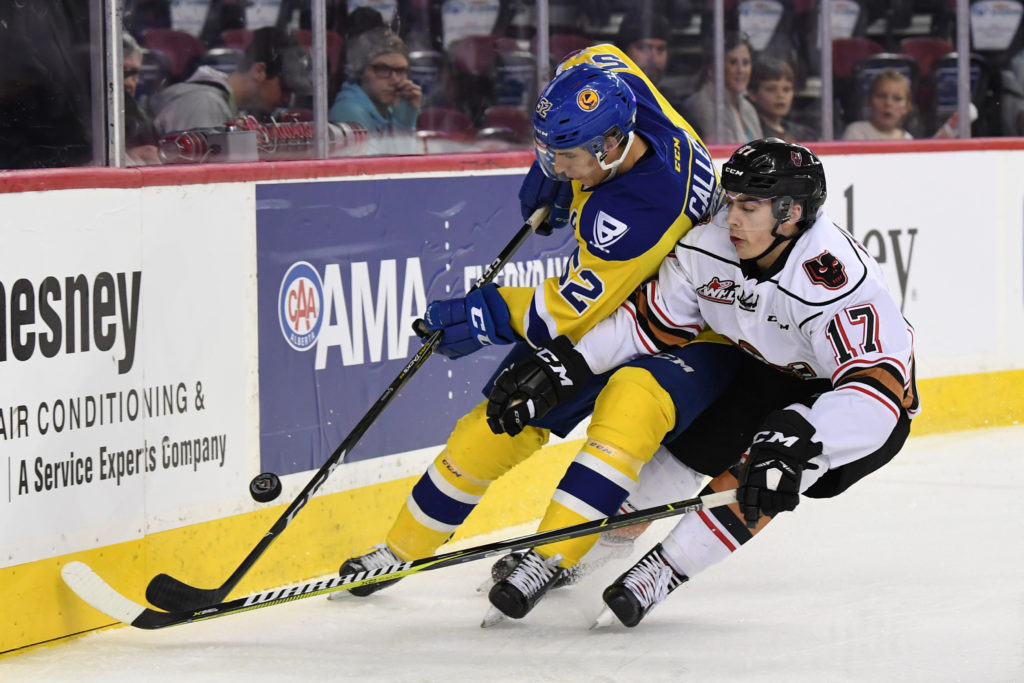 The Hitmen continue their six-game homestand Friday night against the Saskatoon Blades in the first meeting of the season between the clubs.

Last year saw the Hitmen finish 2-2 against the Blades, with both teams winning once at home and once on the road, and three of the four meetings decided by a single goal. Tristen Nielsen led the Hitmen in scoring during the season series with six points, (4G, 2A), while Jake Kryski was next with five (1G, 4A).

The Hitmen are coming off a tough winless three-in-three set last weekend, with the most recent clash ending in a 6-5 overtime loss to the Red Deer Rebels. Mark Kastelic scored a pair of goals, while Zach Huber, Carson Focht and Josh Prokop added single markers. Prokop’s goal was the first in his WHL career.

Despite still searching for their first win, head coach Steve Hamilton knows that the club has yet to reach their potential and play to their capability.

“The schedule is never soft,” Hamilton said about the tilt. “It’s another high octane team and we can’t play a loose defensive game. If we do we’ll pay the price for it, we have to be all in for every detail of the game.

“We need to see our game through for the whole duration.”

Saskatoon meanwhile head into the tilt after a 5-3 win over the Edmonton Oil Kings Wednesday night, to improve their record to 4-2 on the new season. Friday will mark the second game of a four-game Central Alberta road swing which wraps up Saturday night in Lethbridge.

The Hitmen will have a couple of days off after Friday’s game, returning to action Monday afternoon on Thanksgiving Day when the Prince Albert Raiders roll into town for a 2 p.m. start, in the fourth game of a six game home swing.

Vladislav Yeryomenko is one assist away from 50.

Mark Kastelic (3G, 1A) is riding a three-game point streak.