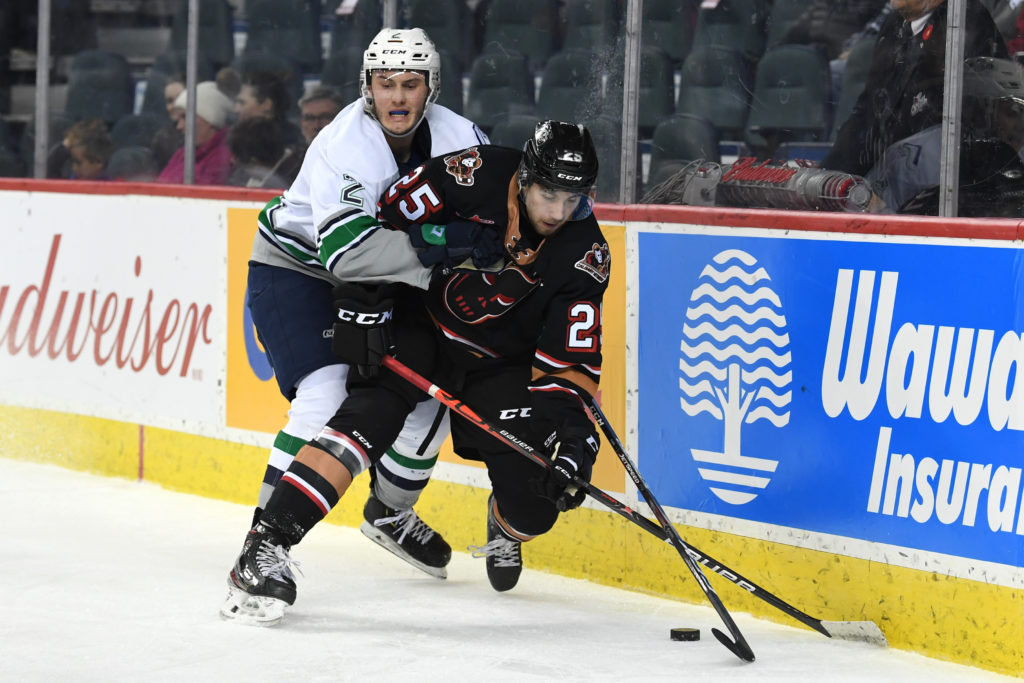 It was a night where nothing seemed to click.

To wrap up a stretch of three games in four nights, the Hitmen fell 2-1 to the Seattle Thunderbirds Monday night to end a four-game winning streak.

The effort was there, but the execution was not.

“I thought our effort was legitimate,” head coach Steve Hamilton said. “Considering the circumstances, we knew tonight was going to be a tough game. We didn’t have a lot of polish with the puck and that’s going to happen from time to time.

“I don’t fault our at all guys. They didn’t mail it in and they played hard. We’ll get some rest and reset, we’ll be fine.”

Layne Toder scored the lone marker for the home side while Brayden Peters made 26 saves to keep the Hitmen in striking range.

Matthew Wedman and Keltie Jeri-Leon provided the goals for Seattle and Roddy Ross finished the night with 34 saves.

A slow start once again proved to be the story for the Hitmen, as just 33 seconds into the contest Wedman would strike on a backdoor play as nobody was able to tie him up which resulted in the easy tap in goal.

Jeri-Leon would then score the game-winner off a shot that handcuffed the Hitmen goaltender just over two minutes later.

And that was all the offence needed for the U.S opponents.

“Starting on time has been a bit of an issue,” Hamilton said. “Off the top of my head that’s four or five times that the first shot has gone in. That’s a tough way to get your engine running when you are put back on your heels.

“That’s not on our goaltender, that’s collectively as a group. You have to have that mental edge when the puck drops and not ease your way into the game.”

A night that saw passes bounce of sticks, shot after shot miss the net, it was an off night overall that the club hopes to shake off fast.

“We did what we could but it just wasn’t enough,” Toder said. “Nothing was really going well but you aren’t going to be perfect every single night, it happens.

“We aren’t going to sit around and make excuses, we know there are things to work on and we’ll get better from this.”

And now the attention shifts to Saturday night with a date against the Saskatoon Blades followed by a Central Division matchup with the Edmonton Oil Kings Sunday afternoon.

Two huge games to kick off a busy November schedule.

“We want to forget about this one and move on,” Kastelic said. “We have some good teams coming into our building and we need to be ready for them.

“It’s going to be an important week of practice to work on our mistakes and clean things up in all aspects.”