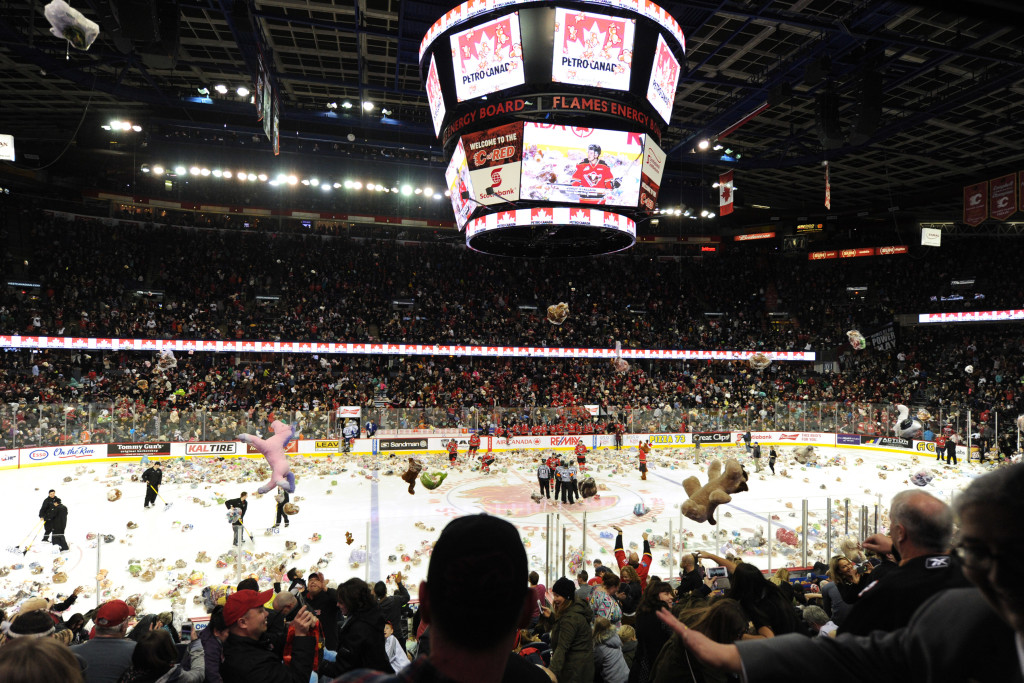 Jordy Stallard’s much-anticipated goal may not have been bardown but it certainly resulted in a beardown at the 21st annual Petro-Canada Teddy Bear Toss.

Stallard ensured a record-setting 28,815 stuffed toys rained down from a sellout crowd of 19,289 at the Scotiabank Saddledome today when he fleeced Swift Current Broncos goaltender Travis Child with a shot from the slot at 2:41 of the second period.

“It felt incredible to get it,” said Stallard, who is already being nicknamed Teddy by his teammates. “I would have been happy just to win the game, but to get the goal just made it that much better. The fans were absolutely outstanding, and to top it off it’s all for a great cause so it was just a great night all around.”

To cap an already electrifying evening, the Calgary Hitmen also skated away with a win.

Jakob Stukel and Jake Bean scored in the shootout and Cody Porter turned aside two of three Swift Current attempts to lift the Hitmen to a 2-1 shootout win over the Broncos.

“It’s funny, you hear the older players trying to explain to the younger players on what to expect, but it’s always understated,” Hitmen head coach Mark French said. “The magnitude of it all is hard to explain. The event has taken on a life of its own and it’s something that we certainly highlight on the calendar.

“It was one of those moments we wanted the guys to go out and enjoy. I thought we were playing on the offensive side of things early on and playing with a lot of nerves in the first period, but it was nice to get it over with (early in the second period) and then focus on the game after that.”

Not to be overshadowed is that the victory propelled the Hitmen into a three-way tie for top spot in the Central Division with the Red Deer Rebels, who fell to Prince Albert, and the idle Lethbridge Hurricanes.

“We have a tough road schedule coming up against some real good opponents, so we knew we had to finish this mini homestand with two points,” French said. “This is a very important event for our organization, but it was certainly nice to get the two points as well.”

Porter made 16 saves for his 11th win of the season, with his biggest stop coming with only 18.9 seconds left in the first period when he stoned Broncos captain and leading scorer Jon Martin on a breakaway to prevent the Hitmen from going down by two goals.

Swift Current’s Tyler Adams, to the dismay of the sellout crowd, opened the scoring just over five minutes into the contest with a nifty wraparound goal that eluded Porter.

It would be the only puck to find its way behind the Hitmen netminder on this special night for both the Calgary Hitmen Hockey Club and the community.

Stallard, from Travis Sanheim and Layne Bensmiller, evened the contest with the “Teddy Bear Toss” goal less than three minutes into the second frame that put an already energetic crowd into a frenzy.

“It was a great play by Travis to get it back door to me,” Stallard said. “To be honest, I think I might have fanned on it, but luckily it went through his legs. It became a blur after that. I didn’t even have time to celebrate.”

Following a 37-minute delay to clean up the immense piles of stuffed toys, the two teams traded chances but solved nothing in regulation or three-on-three overtime.

“It was a great atmosphere today,” said Bean, who couldn’t have timed his first WHL shootout goal any better. “I thought we had our moments today, especially a solid third period, so to come out with a win feels great.”

The stuffed toys that eventually made their way onto ‘Dome ice will be shared by over 50 local agencies, including the Calgary Food Bank, Stephen’s Backpacks, the Salvation Army and Siksika Children’s Services.

“It’s a great opportunity as players to give back,” said Bean. “It really puts everything into perspective and shows us that hockey is just a game. There are a lot bigger problems in the world, but if we can help in whatever way we can then we’re more than happy to do that.”

The Hitmen players wore special red-themed teddy bear jerseys that will be featured in an online auction on Monday, with proceeds benefiting the CBC Calgary Suncor Food Bank Drive. Each jersey will be accompanied by a custom-made teddy bear. The auction bears, dressed in a one-of-a-kind Hitmen T-shirt, will come with a $25 gift card, courtesy of Build-A-Bear Workshop, and a personalized player voice message. Visit HitmenHockey.com on Monday for details on how to place a bid.

Since the inaugural Petro-Canada Teddy Bear Toss, held on Dec. 16, 1995, the Hitmen, with the support of their partners and fans, have collected close to 300,000 stuffed toys for Calgary and surrounding area agencies.