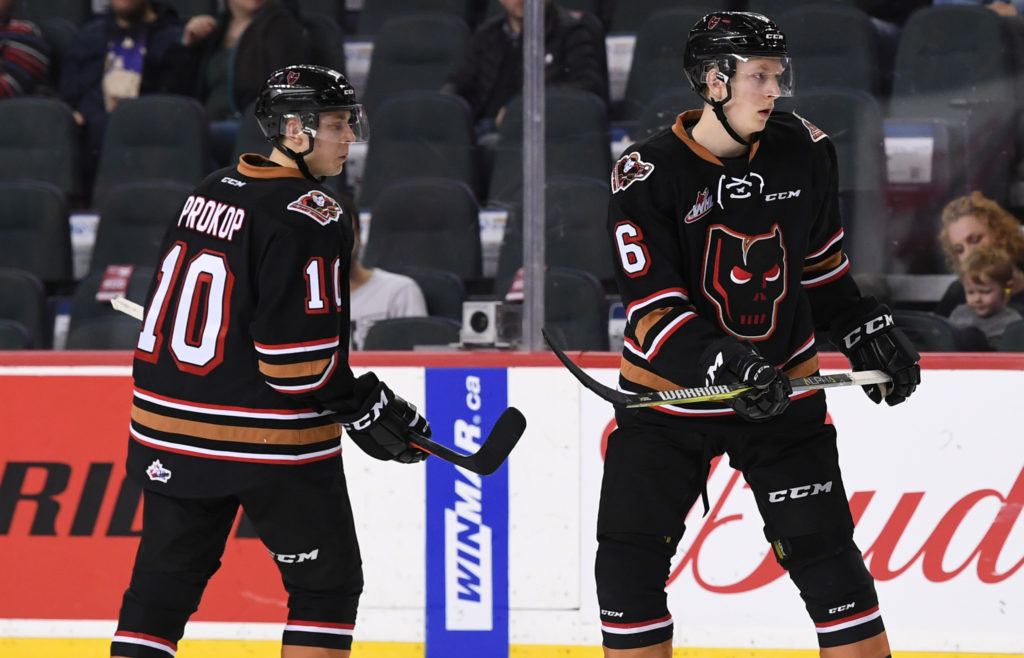 When Josh Prokop joined the Hitmen from the Vernon Vipers of the BCHL in late September, he knew that he would finally get to do something he never had the chance to do in his hockey career.

Play alongside his little brother Luke.

“It’s been a cool experience and a lot of fun,” Josh said. “It’s something we’ll always remember after it’s all said and done.

“We can lean on each other if things aren’t going well through the ups and the downs of the season and the struggles every player goes through personally. It makes things easier knowing he’s here.”

Growing up in Edmonton, they had quite the battle over the years, as they would clash over anything and everything like any brothers would.

It was a sibling rivalry of the sorts, going head-to-head on a daily basis.

“It was pretty chaotic at times,” Luke laughed. “We would fight over little things like toys and the TV, and especially the remote. It was always a battle for who had it and for how long.”

“We were pretty competitive,” Josh added. “I always tried beating him pretty bad at anything we did with being the older brother and it seemed like we always wanted to beat each other.

“It was all in fun of course and I think it helped us become the athletes we are today with that competitive nature.”

A highlight for them growing up was the intense ball hockey matchups that they would have daily in their garage.

No ref, no penalties, and no goalie, it was just Prokop vs Prokop.

“There were times Josh tried to get me to go in net to practice his shots but I would refuse to go in because I was scared of the ball hitting me,” Luke said. “Those orange balls hurt especially when it would freeze up so it was just a one-on-one battle.

“I do remember that our dad would go in net from time to time. This is when we were younger and he could handle our shots but not sure he could do that now.”

Fast forward to the present day, and the Prokop’s still go head-to-head in practice but are more relishing the fact that they get to play together.

It still hasn’t quite hit them that it’s happening, as it’s been a surreal experience.

“I think it’ll settle in a few months just because it’s still so new to us,” Luke said. “One thing for sure is that I’ll never forget my first career WHL goal when Josh shot it off the end boards and it came to me and I was able to put it in the back of the net.

“Seeing him score his first goal was pretty special and I was so proud of him,” Josh added. “I can have some fun with him about it though that he wouldn’t have scored it without me.

“I can use that as some ammunition since it’s his only goal so far.”

Outside of them, the only people who may be more excited that they are suiting up for the Hitmen on a nightly basis are their parents. It’s been no more traveling back and forth from Alberta and B.C., which has been kind for the mileage on their cars.

Now the only dilemma they have is who to watch when they are both are on the ice.

“It helps being so close to home and it’s amazing to have their support,” Luke said. “I think it helps that we play different positions but I think our dad would focus on whoever has the puck.

“Our mom on the other hand has been more concerned about what jersey to wear and sometimes she’s asked to get a jersey with a 6 and a ten on it so she doesn’t have to pick.”

It’s without a doubt been a unique experience, being the first brother duo since the Sanheim twins to play for the Hitmen.

They’ve had different journeys to get to this point in their careers, but now they get to do it all together.

“Since we’ve both moved over here and gotten the chance to play together, we’ve grown together and became closer than ever,” Luke said.

“I am thankful to share these moments with him and I know it’s something we will cherish forever.”