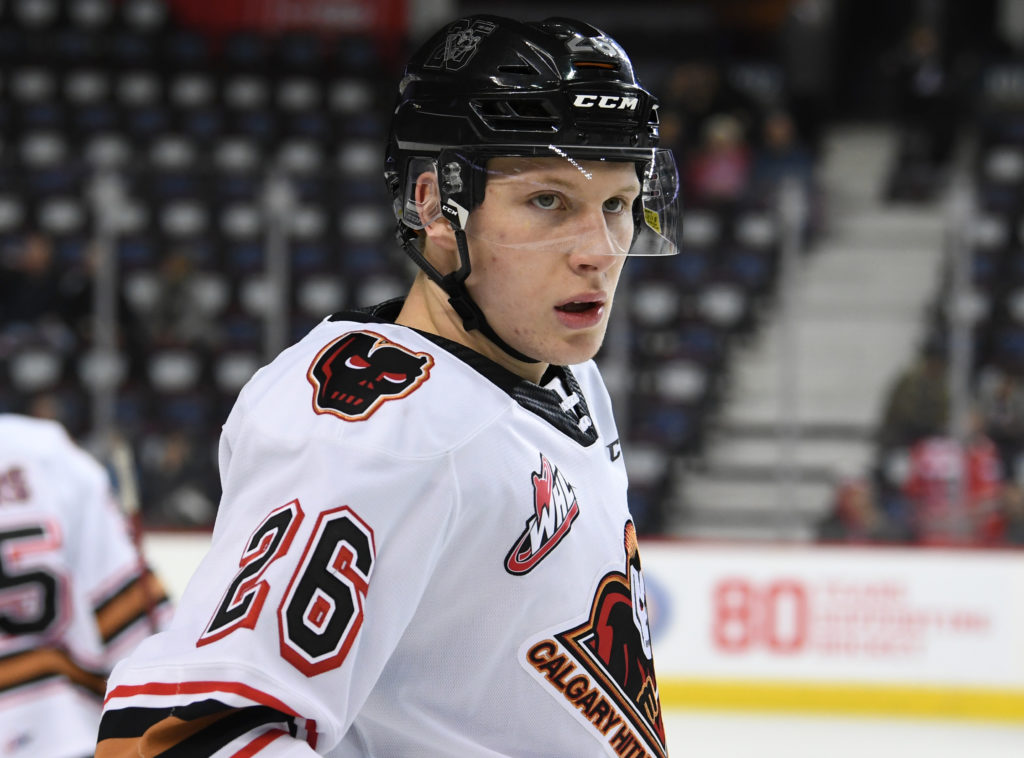 This motor runs on diesel.

Newly acquired Hitmen forward Conrad Mitchell was pumped up when he found out he would be playing for the Hitmen after being dealt from the Everett Silvertips last Thursday Jan. 9, a day before the WHL Trade Deadline.

A new injection into the lineup.

“I am really excited about taking on a new opportunity and getting to play closer to home,” Mitchell said. “The guys were super welcoming and the coaches have done a great job in getting me ready for game action and overall helping make it a smooth transition.

“It’s a very tight knit group here and I’m very happy to be a part of it.”

Mitchell brings a new element to the Hitmen lineup with his imposing presence standing at 6-foot-5, while weighing in at an eye-opening 230 pounds. When he’s on the ice, everyone takes notice.

And, his game was on full display this past weekend as he made his debut last Friday night against the Lethbridge Hurricanes, which was then followed up by picking up his first point as a Hitmen Sunday against Swift Current.

“I like to bring a power forward mentality,” he said. “I like to go out every shift providing energy with big hits and be strong on the forecheck. I know I’m a big body out there compared to others and I try to use it to my advantage.

“There were a lot of nerves to make a good first impression. I was pretty excited to have my family be there to watch and it was nice to get that first point fairly quickly. I heard my linemates on the ice telling me to throw it to the middle and I thought ‘perfect now it’s on them to finish it off.’”

Being closer to home was definitely an added bonus for the 18-year-old, being born and raised in Thorsby, AB.

Back in the province where his career began.

“It definitely brings back lot of memories being closer to home,” he said. “A couple come to mind like the one year we went to provincials and won. That was a special year overall for us as a group and I scored in that game to make it sweeter.

“Another was back in Bantam, I was an affiliate for my older brother’s team and actually had to play goalie. I remember we won the game 5-2. It’s funny how it wasn’t that long ago but after that I retired from goal.”

And as for the nickname ‘Diesel.’

“We’ll see if the guys keep it going or come up with a new one,” Mitchell said. “The name was born back when I was playing spring hockey a few years ago and I forgot my jersey at home, they had to get me a new one and put ‘Diesel’ on the back of it.

“It’s a unique one for sure and has stuck with me ever since.”