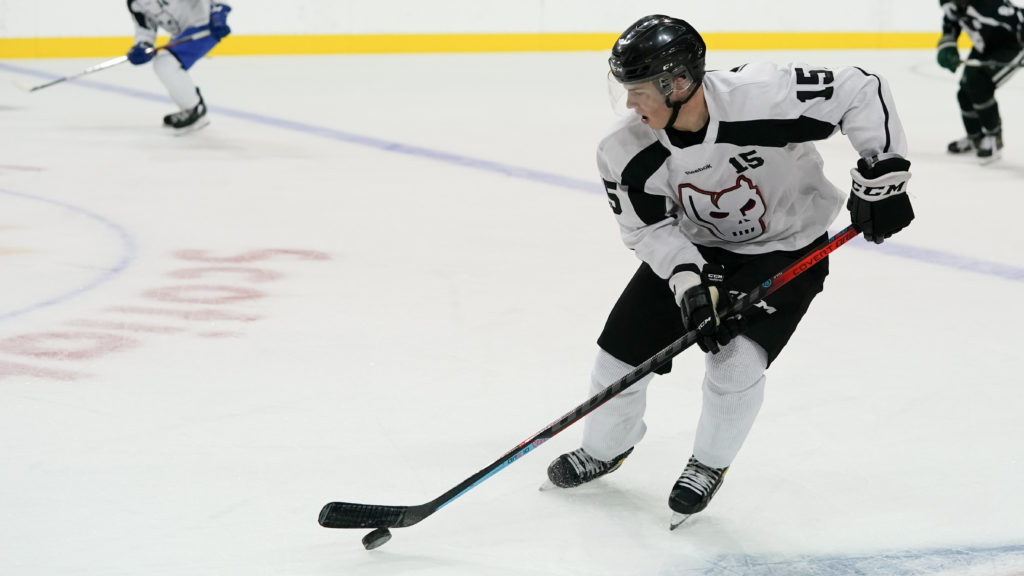 Being here at training camp has been awesome. Seeing the Flames branding everywhere and just to skate on Saddledome ice is a really cool experience. When we started on Friday with fitness testing, I was a little nervous for it but it went really well and it was cool to go through it with the vets and it gave us all an idea on what we need to improve on to get to that level.

Once it was time to hit the ice on Saturday, there were some nerves with the first couple of shifts just with how much quicker it is than what I am used to. It took a little bit to get up to speed and get used to it but felt like I caught on pretty quick. It was nice to score in the first day to start off strong, it was on a two-on-one opportunity, I corralled the quick pass over and was able to bury it. As we continue to get games through camp, I want our team to get going and get a few wins, that’s what we’re all wanting and we’re going to go out and compete hard.

With this being my first official training camp experience with the team, it’s crazy looking back seeing how the time has flown by since being drafted by the Hitmen a year and a half ago. It really felt like a blink of an eye and now I’m here playing at the ‘Dome, it’s pretty surreal. During that time I’ve been working hard practicing six days a week and hitting the gym five days a week to prepare for this jump. I was very fortunate that our team (Delta Hockey Academy) was able to allow our us to work on our individual games.

I’ve worked a lot on my conditioning and skating overall. I know that my conditioning was an area I needed to improve on just with how may more games there are in the WHL. I like to play as a two-way forward, and you need good conditioning and skating to be successful at it. I would say I’m a goal scorer but lately I’ve been trying to be more of a playmaker. I know it’s harder to score in this league and you have to be creative in finding different ways to generate those scoring chances.

I’m ready to do whatever it takes to make the roster for this season. I’m going to work my tail off and see how things go from there.