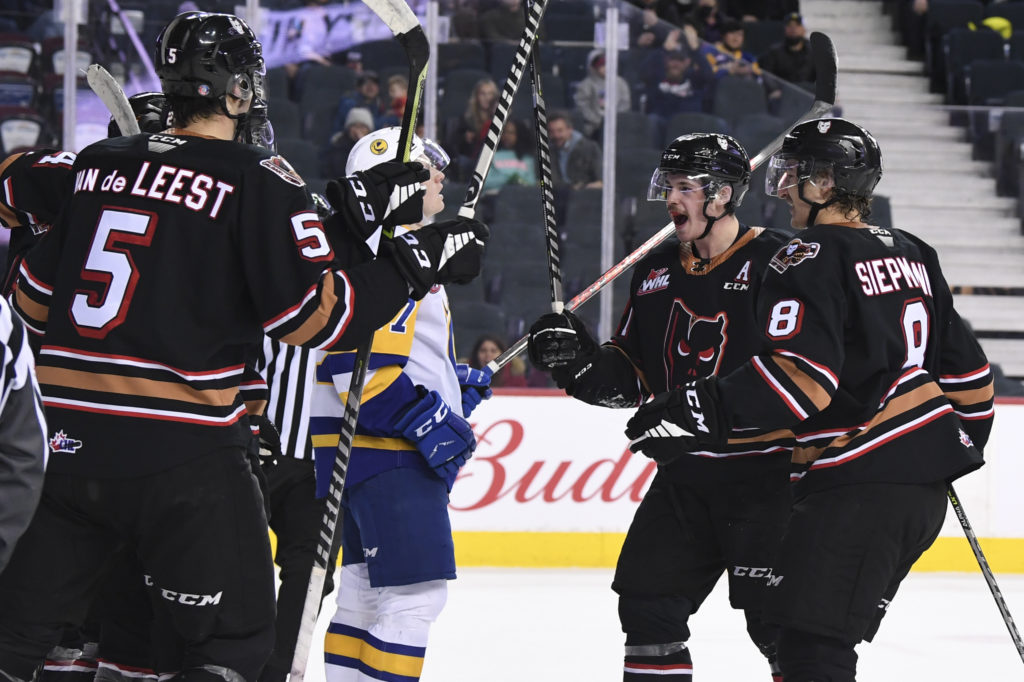 Calgary Hitmen faced off against the Saskatoon Blades for the first of four regular season match ups Saturday afternoon at the Scotiabank Saddledome. The Hitmen put up some big numbers and came out victorious with a 7-0 win.

Maxim Muranov quickly opened up the scoring with his first WHL goal at 1:29 into the first period. It remained a one goal game until Sean Tschigerl found the back of the net 6:14 into the second period scoring his ninth goal of the season.

Muranov followed up shortly after with his second of the game making the score 3-0 for the Hitmen. The Import from Russia was a Hitmen first-round pick 35th overall in the 2021 Canadian Hockey League Import Draft. Blake Heward picked up his second goal of the season making the score 4-0 at 15:48 into the second. In the last seconds of the second period Tschigerl struck again with helpers from Riley Fiddler-Schultz and Zac Funk.

Tyson Galloway opened up the third period scoring just sixteen seconds in putting the Hitmen up six goals. Tschigerl secured the hat trick with minutes left in the game making the final score 7-0. It was a strong game for net minder Brayden Peters coming out with his second shutout of the season.

The Hitmen return to the ice tomorrow, Sunday, Nov. 28 against the Regina Pats. Note the special game time, 11:00 a.m. for another in another Sunday Funday at Scotiabank Saddledome.  The day features “Farley’s Family Feast” with special $2 prices for cotton candy, water, pop, hot dogs and popcorn.  There are also select $5 menu items as well. The homestand is followed by visits from Moose Jaw (Dec. 2) and Lethbridge (Dec. 4).  The meeting with the ‘Canes is the ENMAX Teddy Bear Toss where fans are asked to bring a stuffed toy to the game and toss it on the ice for charity when the Hitmen score their first goal.