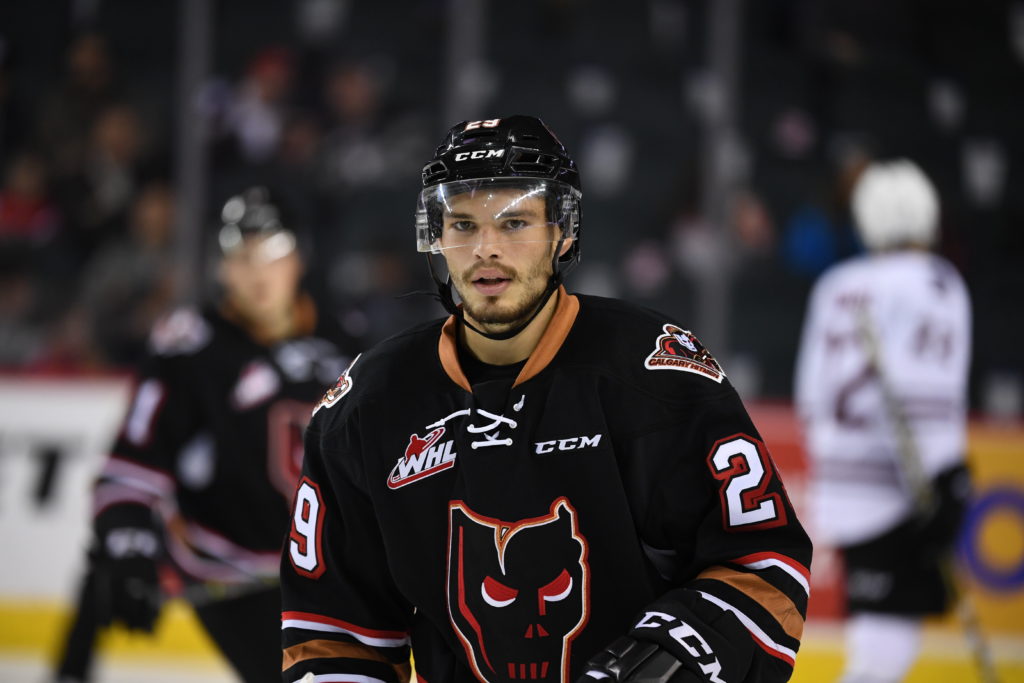 Kaden Elder knows how to win.

After all, he did win the Ed Chynoweth Cup with the Swift Current Broncos last season.

The Hitmen acquired the 20-year-old forward from the Broncos last week prior to the three-in-three weekend, adding a veteran with 253 career games played as the third overager alongside Luke Coleman and Jake Kryski.

“It’s a good opportunity for me to come out to Calgary and play with a solid team that’s going to have a good year,” Elder said. “I want to be a key part of it and help take the team to the next step.”

“Playing on Swift Current last year we had a great year with winning the championship and I think I bring a lot of leadership and experience from that run. Hopefully I can take the young guys under my wing, get them to follow the work ethic and drive to be successful in this league.”

It was a short turnaround for the former first-round pick in the 2013 WHL Bantam Draft, getting in a single practice before hitting the ice with his new club Friday night in Red Deer.

“It was a little bit of a change coming to a new team and new system but it was a good transition,” he said. “The guys have made me feel like I’ve been here for a long time. It’s nice to know that they have my back especially right away off the bat.

“Having that team chemistry off the ice is huge and it’s already so high for us which will work in our favour as the year goes on.”

With the Hitmen group still one of the younger rosters in the WHL, Elder sees it as an opportunity to grow together and also take some players under his wing. Being the mentor similar to what he had when he first broke into the league.

“Your first year playing in the ‘Dub is a huge eye-opener with a lot of learning,” he said. “I think I can help them out to achieve their personal goals and help them feel comfortable out there.

“There are a lot of ups and downs and there will always be those waves every season. Each game is a lesson and you have to learn from them to be better for the next one. Adversities are what make you stronger and it’s all about how you face it and how you push through it.”

As for goals, the winger is looking to continue his strong defensive play and chip in more offensively, all in hopes of getting the club back into the post-season.

“Defence comes first. You always want to put points up on the board but we have to keep the puck out of our net first. Whether it’s on the penalty kill or at even-strength, the defensive zone is a major part of the game.

“It’s still early on and we have a good team and we know that if we play our game we can capitalize and have a good season.”