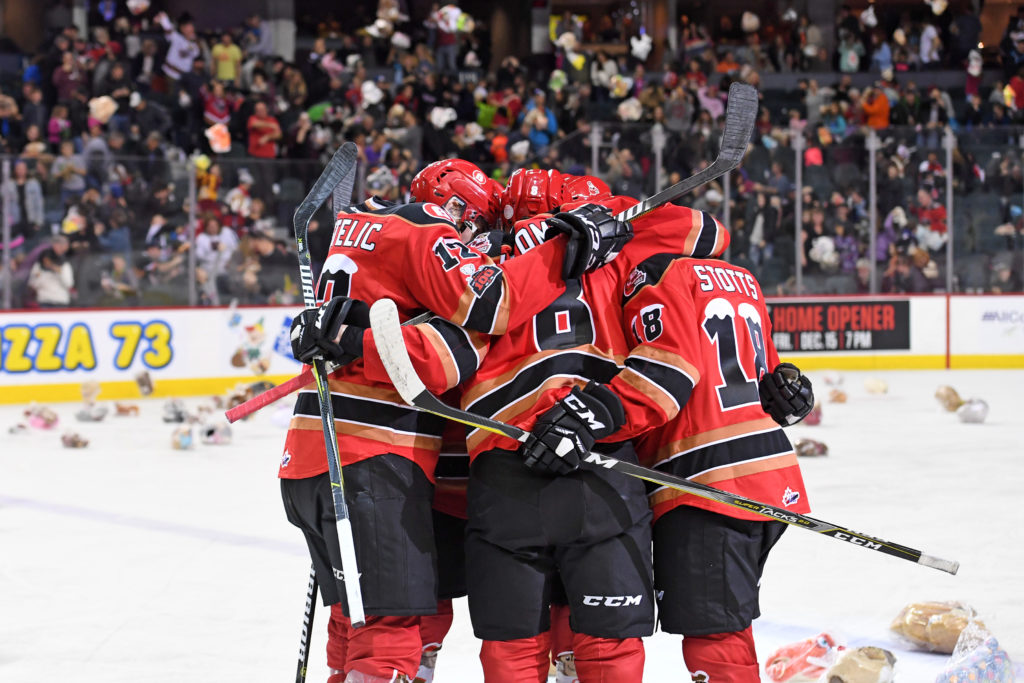 It didn’t take as long this year for the Teddy Bears to fly.

Fans last season had to wait till near the end of the first to toss out the bears but this time was different.

Vladislav Yeryomenko set the crowd in a frenzy just under halfway through the first on the powerplay to get the fur flying.

“It’s an unforgettable moment,” Yeryomenko said. “It’s possible it can only happen once in your life and it happened to me.”

“I enjoyed the moment of it all.”

Unfortunately for Yeryomenko and the Hitmen, the Moose Jaw Warriors played the role of spoiler as they skated away with a 6-3 win Sunday afternoon.

For the Hitmen, Andrei Grishakov and Jake Kryski scored the other markers, while Nick Schneider made 22 saves.

“They don’t need many opportunities and when they do, they finish them off,” Jake Bean said on the loss. “We needed to control the neutral zone and not let them have much time in our end.”

“We didn’t do that tonight.”

The Hitmen had leads of 2-0 and 3-2 at points of the game before the Warriors would storm back to skate away with the win.

Grishakov would double the Hitmen lead just a minute into the second frame before Moose Jaw would even things up with goals four minutes apart of each other.

Kryski would restore the lead at the 7:10 mark of the second finishing off a pretty tic-tac-toe play, but the Warriors would score two more to take a 4-3 lead into the intermission.

The CHL’S second ranked team would then add two more to seal the deal.

Aside from the unfavourable outcome, Hitmen Vice President and Alternate Governor Mike Moore was thrilled to see so many bears tossed out and proud of the team, and community.

“We don’t focus on the number, it’s the experience and what we do for the community,” Moore said. “We never take this for granted and know that it’s about giving back.”

“It’s the fans and the city that makes it world classed. We’re honoured and privileged to be apart of it.”