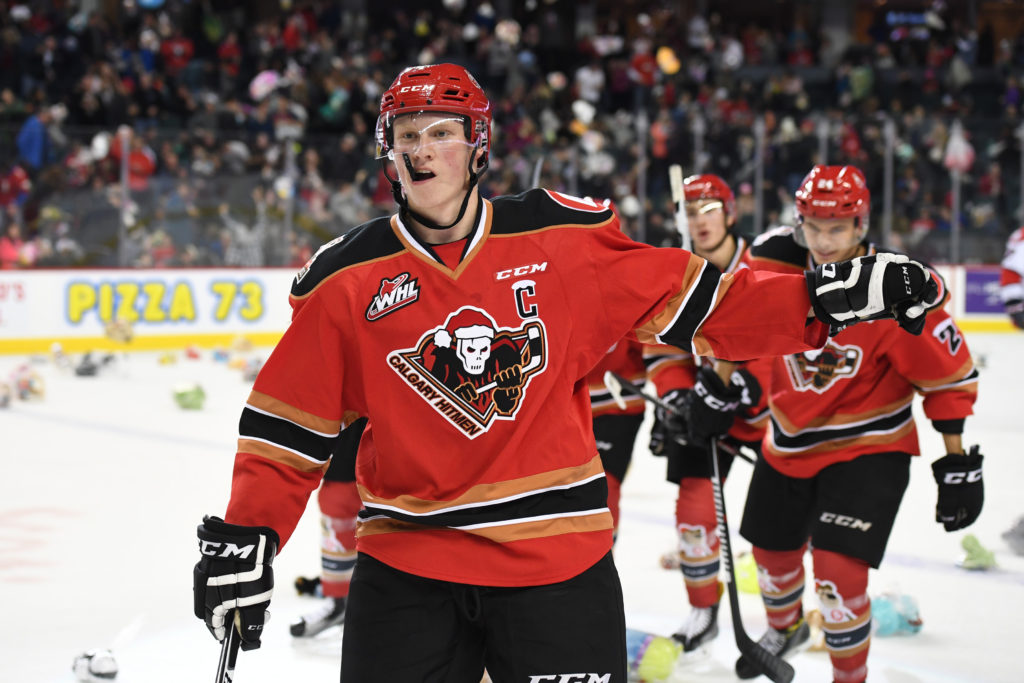 This year’s Teddy Bear Toss goal zipped in from the point.

Calgary Hitmen captain Micheal Zipp became The Brick Teddy Bear Toss hero when he found the back of the net with only 12.6 seconds left in the first period, erupting a wave of 23,924 stuffed toys onto Scotiabank Saddledome ice.

“It’s pretty special,” said the veteran defenceman. “I think some people forget what the Teddy Bear Toss is for, and that’s the children and the people in need. That’s the special part for me.”

Unfortunately for Zipp and his Hitmen, there was another captain by the name of Tyler Wong who came to spoil the party.

The Hurricanes sniper netted a hat-trick and Giorgio Estephan added a single to lift visiting Lethbridge to a 4-2 win over the Hitmen in front of an immense crowd of 17,601 at the ‘Dome this afternoon.

“It was unfortunate we didn’t get the win, but I thought we did some good things tonight,” said Zipp. “We pushed in some areas, but for the most part we’re not playing a full 60 minutes and that’s hurting us right now.

“We need to grab the bull by the horns and take charge.”

To the dismay of Hitmen fans, Wong opened the scoring for the visitors with a blistering shot to the top shelf from the high slot at the midway point of the first period.

The Cochrane native notched his second marker of the contest just over two minutes later while on a power play.

Lethbridge extended its lead to 3-0 on yet another man advantage in the opening period when Estephan one-timed a cross-ice pass from Egor Babenko.

“Three first period goals in a fairly short period of time, two of them on the power play, was a moment we needed to manage better,” said Hitmen head coach Mark French.

Then came the fur thanks to Zipp.

Suddenly the Hitmen were in the game.

As were their fans.

Wong, though, restored Lethbridge’s three-goal lead by burying his hat-trick marker at 11:34 of the second frame.

Calgary’s Malenstyn then rounded out the scoring just over two minutes into the third period by banging in his sixth goal of the season on a rebound. Mrkonjic and Lucas Cullen contributed the helpers.

‘Canes netminder Stuart Skinner, who shutout Calgary earlier this season, made 26 saves for his 10th win of the season while Cody Porter allowed four goals on 31 shots.

Calgary went 1 for 2 on the power play and Lethbridge scored twice on six opportunities.

Aside from the outcome, Hitmen General Manager Mike Moore says it was still a proud day for his team, the entire Hitmen organization and the community.

And for good reason.

Thanks to the generosity of Calgary fans and The Brick, a total of 60 local agencies, including the Boys and Girls Club of Airdrie, Alberta Children’s Hospital and Calgary Food Bank, will share in the teddy bears tossed at this afternoon’s game.

“It is a hockey game, and we don’t like to lose hockey games, but it is still a special day when you put things into perspective,” Moore said. “Our community gets behind this like no other in the world. That’s why it is world famous and why we’re so darn proud of it.”

Since the inaugural toss on Dec. 16, 1995, the Hitmen, with the support of their partners and fans, have collected 323,343 stuffed toys for Calgary and surrounding area agencies.