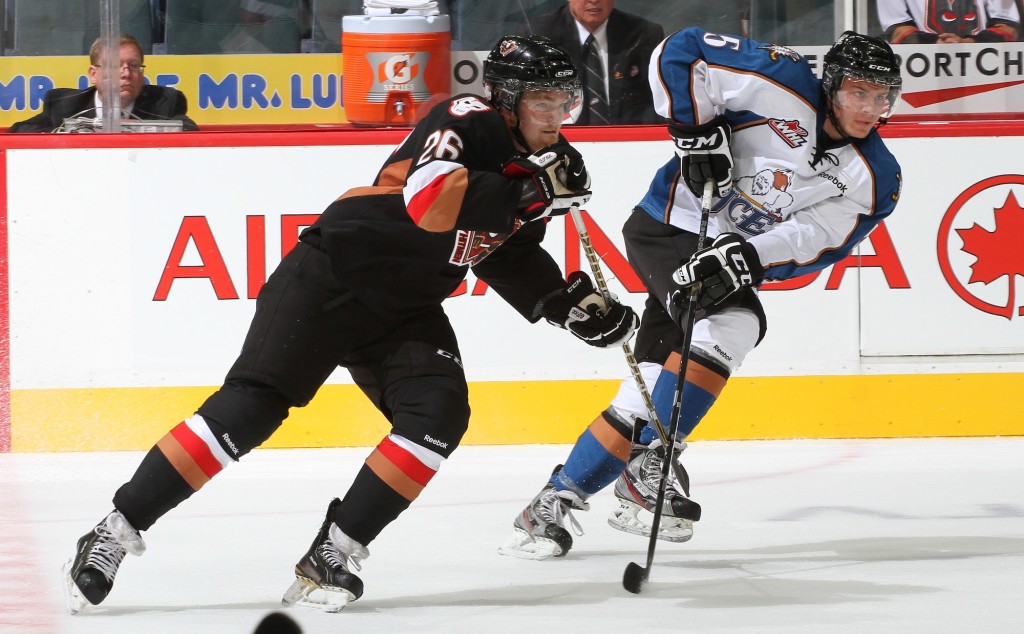 It was a night of spectacular goals, impressive saves and unrelenting energy, resulting in a 5-1 home opener victory over the Kootenay Ice on Saturday.

“I thought there were a lot of positives, I didn’t like our start, I thought we got outworked and weathered the storm then we started to play better, we found a way to win and got better as it went,” said Mike Williamson. “We want to be a team that starts better than we did tonight”

“It was exciting to finally play in front of the home crowd, this was the biggest crowd I’ve ever played in front of, and I live pretty close so my parents were able to be here to see that goal,” commented Henry on the 9,055 fans who packed the Scotiabank Saddledome.

“I was happy to get my first goal in my first game here and I look forward to building on that,” said Jones on his personal success.
Overage forwards Cody Sylvester and Brooks Macek also registered two points (1g, 1a) each in the win.

“It’s good for me to find my groove early, getting the pucks to the net is going to help in the long run,” said Sylvester regarding his five point start over two games.

The first Hitmen home goal of the 2012-13 season came with less than two minutes remaining in the opening period. Brady Brassart poured on the pressure in the Kootenay zone, as his attempted wrap-around landed on the stick of Jones. Jones, acquired in a trade with the Victoria Royals, used his size to gain prime positioning in front of the net and roof it in.

Sylvester continued to ride a hot stick as he dipsy-doodled around the Kootenay defenceman, finding Greg Chase along the right circle. Chase returned the favour as he delivered a beauty pass in front of the crease back to Sylvester who finished off the play.

Kootenay cut the lead in half with less than five minutes remaining in the second period. An unlucky deflection off a Hitmen defender, originally shot by Kootenay’s Luke Philp, ended up sneaking behind Chris Driedger.

Another new face in the Hitmen lineup would get on the board early in the third frame. As a scrum ensued down low, Strathmore product, Darian Henry redirected it past Mackenzie Skapski for his first career WHL marker.

A spectacular acrobatic save by Driedger off of Kootenay’s Jakub Prochazka maintained the two-goal cushion for Calgary as the third period winded down. With the puck in mid-air behind the netminder, Driedger spun around and batted the puck out of harms way.

Macek spearheaded the final two Hitmen goals as he powered past the Ice defenders to find Jones in the slot with a backhand pass, setting up the one-timer.

With the clock expiring, it would be Macek again as he charged into the Kootenay zone and took advantage of the sprawled out netminder out of the crease, displaying patience as he slid it into the empty net.

Chris Driedger made 27 saves for Calgary, including 14 in the first period, as the Hitmen outshot the Ice 31-28.

The Hitmen have now started off the year with a 2-0 record. The win against Kootenay will bolster the team as last year’s season series versus the Ice saw Calgary surrender five games while winning three.

“I think it’s good for everyone as long as we don’t get ahead of ourselves,” added Williamson.

Calgary now heads to Edmonton on Friday, September 28, before starting a three-game home stand the following night, Saturday, September 29, against the Red Deer Rebels.  Game time is 7:00 p.m. at the Scotiabank Saddledome.  The Hitmen will also host Prince Albert and Edmonton before heading back out on the road.Single game day tickets are on sale now at all Ticketmaster locations and the Scotiabank Saddledome box office.  Order online at www.ticketmaster.ca or by phone at 1-855-985-5000.  For more information on tickets, including Name Your Game Flex Packages and season tickets, call Customer Service at 403-777-4646 or visit www.hitmenhockey.com.