DONATE PENNIES TO FREE THE CHILDREN

The Canadian penny is officially going out of circulation of February 4.  To give the penny a proper good bye, Free The Children has kicked off one of the largest penny drive ever called We Create Change with the goal of providing clean water to 100,000 people in communities around the world.

Why Water?
Every day, women around the world spend a cumulative total of 200 million hours collecting water for their families. 80 percent of illnesses in developing countries are linked to poor water and sanitation. This year, in recognition of the global water crisis and the effect that events like last year’s East African drought have on developing countries, Free The Children has set a goal of providing 100,000 people with clean water for life. Free The Children’s We Create Change campaign, made possible by RBC, is one of Canada’s largest penny drives. Coinciding with the penny going out of circulation, we are challenging Canadians to donate their pennies to an important cause: water. Officially launched in 2012, this campaign shows that pennies can create a lot of change. 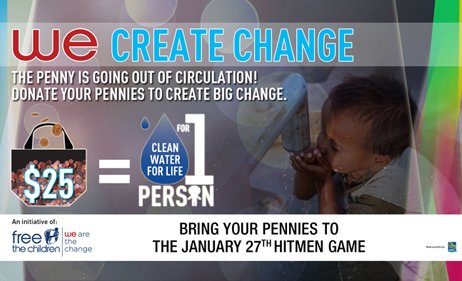