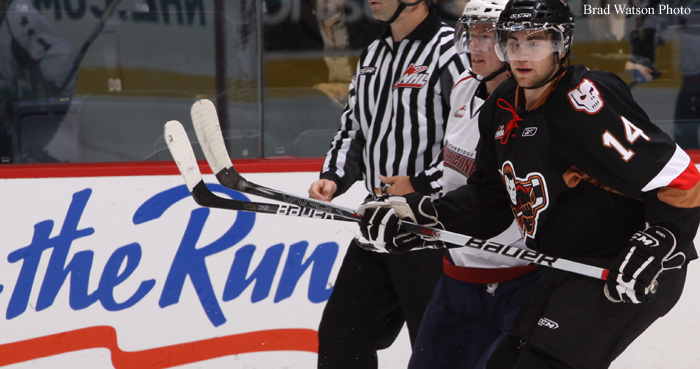 The Calgary Hitmen (19-16-2-1) play game four of their BC Division road trip tonight on Vancouver Island against the Victoria Royals (13-22-2-2) in the first ever meeting between the two clubs.  The Royals relocated from Chilliwack in the off season where they formally played as the Bruins.  Calgary has won two in a row while Victoria is winless in their last six going 0-4-1-1.  Internet Broadcast on http://www.sportsnet960.ca/ starts at 8:00 p.m. MST.  Calgary is 2-1 on this swing, coming off Sunday afternoon’s 2-0 shutout win in Kelowna.  The Royals last played Friday night, dropping a 7-6 decision on the road in Portland.

The Hitmen enter play with 41 points, three back of Brandon for seventh in the Eastern Conference, and four points up on Red Deer for the final playoff spot.  Victoria has 30 points to sit eighth in the Western Conference two points ahead of Prince George for a post season berth but six three points back of both Seattle and Kelowna for sixth.

WHL LEADERS:  Victoria’s Kevin Sundher is tied for fifth in WHL scoring with 60 points while Logan Nelson is tied for second in rookie scoring with 36 points…..Hitmen defenceman Collin Bowman has cracked the Top 10 in scoring among WHL defencemen.  With 22 points, he is tied for 18th.