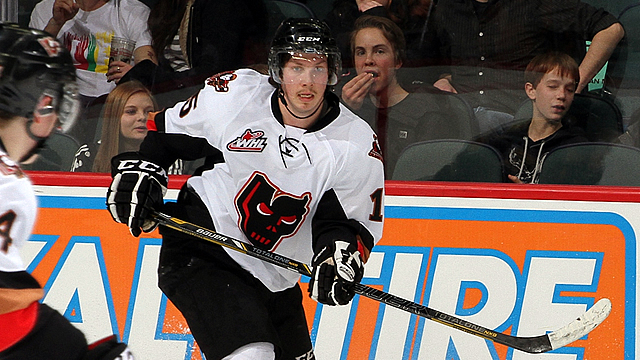 CALGARY, AB – The Calgary Hitmen Hockey Club today announced they have acquired a pair of draft picks from the Kamloops Blazers in return for 20-year-old forward Mike Winther.

The Hitmen receive a fourth round selection in the 2015 Western Hockey League Bantam Draft and a sixth round pick in 2017.

“With the potential return of five over-age players to our current roster we have to reduce our number of 20-year-olds to three before the October 15 WHL deadline,” said Hitmen General Manager and Vice President of Business Operations Mike Moore. “The Hitmen organization would like to thank Mike for his time and we wish him continued success in Kamloops.”

The Hitmen are back in action Friday night when they welcome the Medicine Hat Tigers to the Scotiabank Saddledome.  Game time is 7:00 p.m. in game two of a season opening three game homestand.  The Lethbridge Hurricanes will visit the ‘Dome on Sunday in a 4:00 p.m. start.

Calgary Hitmen season tickets for the 20th anniversary season are available now at the Scotiabank Saddledome box office.  In appreciation for the continued support the Hitmen receive from the community, the purchase or renewal of select 2014-15 season ticket packages will include a complimentary 20th anniversary premium jersey.