The Calgary Hitmen Hockey Club announced today that their three overage players, Brooks Macek, Cody Sylvester and Spencer Humphries, will return as the team’s leadership core for the 2012-13 Western Hockey League season.  Sylvester, who enters his fifth campaign with Calgary, becomes the third player in franchise history to wear the ‘C’ in back-to-back seasons.  Macek and Humphries will each wear an ‘A’ for the second consecutive year.

Sylvester, a Vernon, British Columbia, native also proves to be a community leader by founding the Chance To Play program, a fundraising initiative in support of local minor hockey.  At each Hitmen home game throughout the season, Chance To Play t-shirts will be sold for $20 at the Booster Club table located on the Scotiabank Saddledome concourse.  Net proceeds will provide the opportunity for local youth to participate in sport.

“I’ve had the opportunity to play hockey all my life and now I am raising funds for kids who would not normally have the chance to play so they too can follow their dreams like I did,” said Sylvester.  “The money collected through the sale of these t-shirts will go towards Calgary Minor Hockey and young kids in the city who have supported me and the team by cheering every game.”  The 5-11, 191-pound captain has played 247 WHL games with the Hitmen over the last four seasons accumulating 56 goals and 83 assists for 139 points.  Sylvester has found success early this year, tallying three goals and two assists over two games played.

“Calgary has been very good to me,” Sylvester added.  “Over the past five years I’ve had the chance to play with one of the best organizations in the WHL and now I want to do something to give back to the people and the city of Calgary who have treated me exceptionally well during my time as a Hitmen.” 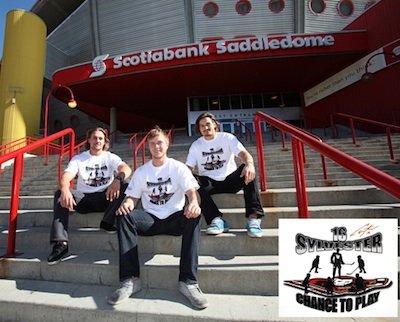 Brooks Macek, a native of Winnipeg, Manitoba, recorded 14 goals and added 24 assists for 38 points along with 19 penalty minutes over 54 games with Calgary last season.  The Hitmen acquired the 6-foot, 194-pound right winger from the Tri-City Americans in January 2010 in a deal that also saw blueliner Spencer Humphries head to Calgary.  During the 2012 post-season, the Manitoba talent suited up for five playoff contests where he notched one goal and added two assists.

This Saturday is Student Night and the Hitmen are offering all students a special $2.00 ticket (plus GST and SFPFF).  Present a valid student I.D. at the Scotiabank Saddledome box office to take advantage of this limited time offer and the opportunity to enter to win an iPad.

For more information on Student Night, call Customer Service at 403-777-4646 or visit www.hitmenhockey.com.