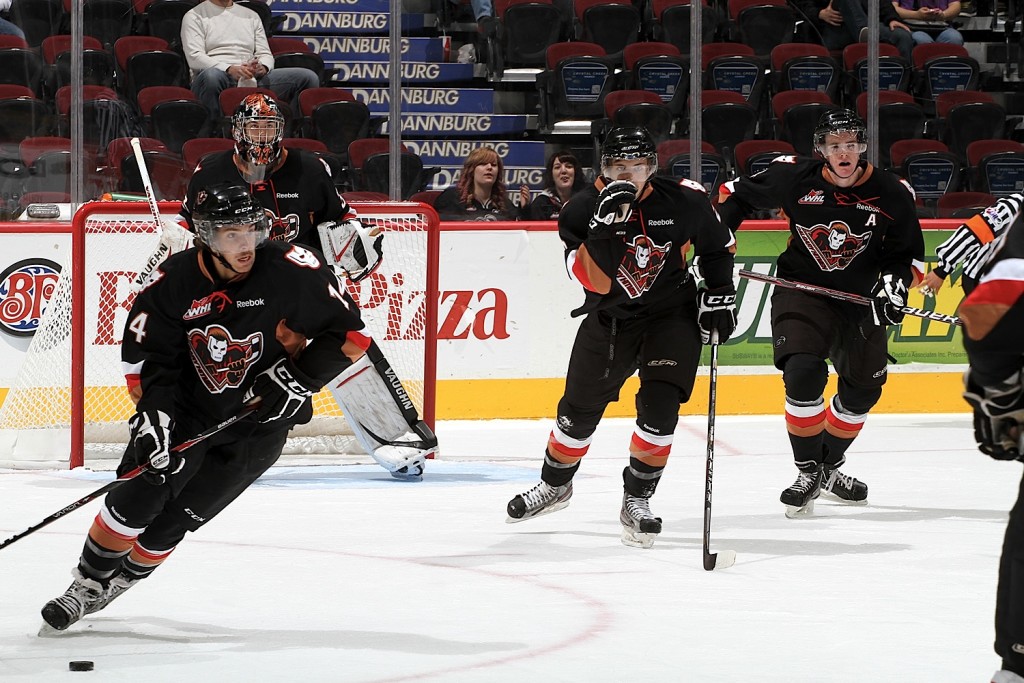 HITMEN HEADLINES: The Calgary Hitmen (5-0-1-1) will try to remain perfect in regulation as they host the Red Deer Rebels (5-5-0-1) tonight at the Scotiabank Saddledome. Calgary enters this evening’s contest coming off a 5-4 shootout victory over the defending WHL champion Edmonton Oil Kings, continuing a streak that has seen the Hitmen pick up at least one point in every game this season. Brooks Macek (5g, 7a) and Brady Brassart (4g, 6a) continue to lead Calgary’s scoring charge over seven games, while defenceman Peter Kosterman tallied his first goal of the season Friday evening.  Selected by the Hitmen in the first round, 19th overall, in the 2008 WHL Bantam Draft, Kosterman was also a notable +4 in the shootout victory.  Ottawa Senators prospect Chris Driedger recorded 32 saves, plus two more in the shootout, earning his fifth win in six appearances.

GOING THE EXTRA MILE: With last night’s 5-4 shootout victory in Edmonton, the Hitmen have, for the first time in franchise history, played four consecutive games that have surpassed regulation. The streak started on Sept. 29 as Red Deer edged Calgary in overtime and continued on Oct. 5 as Prince Albert won 5-4 in a shootout.  On Oct. 7, the Hitmen picked up their first extra session victory against the Oil Kings.

MAKING THE CUT: On Tuesday, the AHL’s Charlotte Checkers announced that 19-year-old forward Victor Rask survived the final cuts at training camp as the Checkers trimmed their roster to 24 players. Rask, selected by the Carolina Hurricanes in the second round, 42nd overall, in the 2011 NHL Entry Draft, scored the game winner in the Checkers’ final exhibition game last weekend and is expected to travel with the team to their season opener against the Houston Aeros tonight.

STREAKIN’: Brooks Macek (5g, 7a) has 12 points in seven straight games. Brady Brassart (4g, 6a) has 10 points over the same span.  Spencer Humphries (1g, 2a) and Carson Samoridny (1g, 1a) both have points in back-to-back contests, while Alex Roach is an impressive +6 in his last three appearances. Chris Driedger has yet to lose in regulation this season and has two-straight wins in as many starts.

DID YOU KNOW?:  This season, Calgary has played seven games, recording at least one point in every contest.  The last time the Hitmen began a season registering at least one point in every contest over a seven-game span was during the 2005-06 campaign.  That season, Calgary won seven consecutive games, including posting three-straight shootout victories, from Sept. 23 – Oct. 12, 2005 before dropping a 3-2 decision in Moose Jaw.

HITMEN FIGHT CANCER: Last week the Hitmen, in partnership with Delta West Academy, announced the launch of a month-long campaign to fight cancer. This fundraising initiative will continue to support the Canadian Breast Cancer Foundation – Prairies/NWT Region (CBCF), as it has for the past three seasons, and for the first time funds will be raised for the Kids Cancer Care Foundation of Alberta (Kids Cancer Care). During the Hitmen Fight Cancer game on Sun., Oct. 28 against the Kelowna Rockets, players will wear pink jerseys that will be featured in an online auction until Tues., Oct. 30 at 8 p.m. MT. Fans can bid on these game-worn jerseys by visiting www.elevateauctions.com/hitmenhockeycancer.

POST-GAME AUTOGRAPHS: Meet forward Cody Sylvester at the Booster Club table located by section 212 after the game.UPCOMING GAMES: The Hitmen take to home ice tomorrow afternoon when they host the Kamloops Blazers, with a 4 p.m. puck drop.  Calgary will then head out for a three-game B.C. road swing starting Tuesday night in Prince George, followed by stops in Victoria and Vancouver.